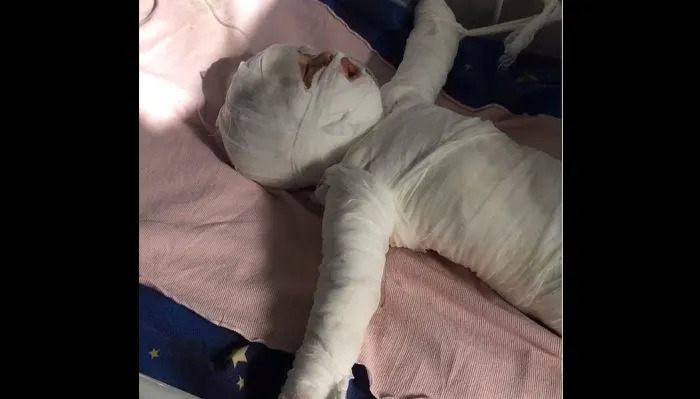 While trying to give her infant a bath, a new mother made a terrible mistake. She brought a bucket of boiling water along with her and accidentally left it too close to the tub. Because she uses the boiling water to warm the water in the tub, she always kept a fresh bucket near so her 11-month-old would not get cold, but this time the baby fell into the bucket of boiling water and burned 80 percent of his skin.

The mother cannot believe the mistake. She is horrified. Her precious baby fell into the bucket of boiling water and has not been the same ever since. The little boy’s name is Daniil Chernenko, and now doctors are working to save his life, which hangs in the balance.

The incident occurred in a small village called Salhany, which is located in southern Ukraine. His mother, Tetyana Chernenko (pictured above), was planning to give little Daniil a bath when the horrific accident occurred.

Because she needed to heat the water of his bath with a bucket, she collected a bucket of boiling water and brought it into the bedroom. She placed the bucket near the table.

As Tetyana went to mix the bucket with cold water, so it was cool enough for the baby to bathe in it, little Daniil fell into the bucket from the table – it happened during the second when Tetyana was turned away from him.

The little baby screamed as the boiling water burned his skin. His mother was horrified and rushed to help him.

“I saw how he fell in the boiling water,” Tetyana told reporters. “I rushed to the bucket and pulled him out. I hugged him, then wrapped (him) in a cotton cloth. When I unwrapped him, I saw his skin was peeling off!”

Tetyana was horrified and had never seen such extensive burns on a person like this. She rushed Daniil to the hospital in Odessa. He was in a bad way and was not guaranteed to survive.

When the little boy got into the emergency room, he came under the care of volunteers who wanted to help. Katherine Nozhenikova, one of those volunteers, took photos of the baby boy in his vulnerable state and shared them online.

Not only was 80% of the boy’s skin burned, but his voice also grew hoarse from his screaming out in pain. Doctors are working hard to save the infant’s life. However, his chances of survival are not certain. The burns were so extensive that they put him on the brink of life and death.

Meanwhile, Tetyana spends every possible moment in the hospital beside her ailing son. She loves him and cannot forgive herself for taking her eyes off her boy.

Police consider the incident an accident and do not blame the mother.

Mistakes can happen, but they rarely result in such disastrous consequences.

We hope Daniil will pull through and heal.