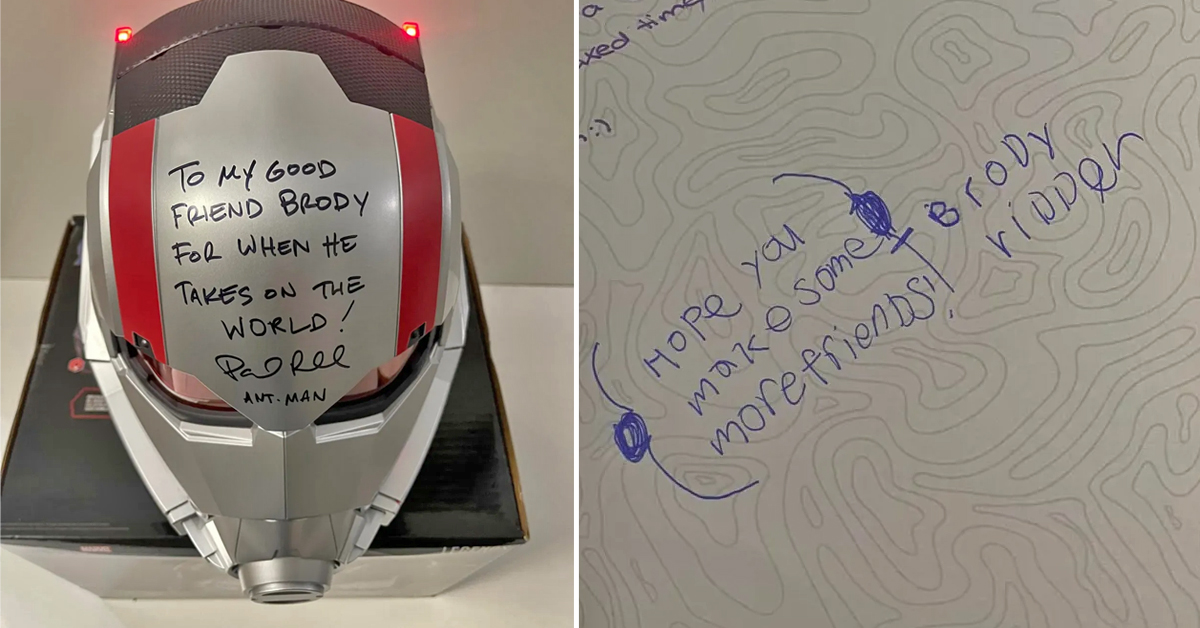 When Cassandra Ridder picked up her son Brody from school on May 24, the lad wasn’t his usual happy-go-lucky self.

Cassandra, 31, said that the sixth-grader didn’t want to talk about his day and only wanted to listen to music. To lighten the mood, she asked him about his yearbook.

Earlier that day, the mom had received an email informing parents that students would be bringing their class yearbooks home. She was curious if Brody got lots of signatures.

But when she brought it up, her son got really sad. He said: “No Mom, no one really signed my yearbook, I asked people and they either told me no or that they would do it later, that they were too busy for me.”

When Brody, 12, handed over his yearbook, Cassandra’s heart sank. The page was almost empty, except for a couple of messages from his teachers and two students’ names.

To fill in the space, Brody had written a note to himself that read, “Hope you make some more friends,” then signed his own name.

“I tried to make him feel better,” Cassandra said. “I told him that it might have just been a hectic day, and to give people the benefit of the doubt. I told him that things will get better and to stay positive, that no matter what, I will always be his friend.”

Cassandra said that her son enjoys chess, dinosaurs, and fencing. However, he sits alone at lunch and plays by himself during recess. His peers can’t relate to his interests.

“He’s super intellectual and the kids in his age group have trouble relating to him,” she explained.

The other kids also make fun of Brody because his ears stick out, and he’s extremely thin. Because of the bullying, Cassandra said that the boy cries to her “pretty much every day.”

Cassandra has worked with the school to try and stop the bullying, harassment, and teasing that Brody had experienced this year.

But upon discovering what happened with Brody’s yearbook, Cassandra reached her breaking point. That night, she wrote a post on the school’s Facebook page for parents.

She wanted to let the other parents know this was happening at the school and remind them they should talk to their kids about being kind to one another.

“My poor son. Doesn’t seem like things are getting any better. 2 teachers and a total of 2 students wrote in his yearbook. Despite Brody asking all kinds of kids to sign it,” her post read. “So Brody took it upon himself to write to himself. My heart is shattered. Teach your kids kindness.”

Cassandra didn’t expect that much would come from it, but the next day, she received an unexpected text from Brody.

He wrote, “Facebook this,” alongside a photo of his yearbook filled with signatures and messages!

“Brody — you are the kindest little kid. You are so loved. Don’t listen to the kids that tell you different.”

“Brody — I hope you have an amazing summer! You’re worth it and you matter!”

Brody had messages from eighth-graders and even 11th graders. Some even put their phones for the kid to contact them.

Cassandra said Brody’s exact words to her were, “This is the best day ever.”

The students who had previously refused to write in his yearbook were suddenly “lining up” to sign their names and write their messages.

And one famous person who caught wind of Brody’s story decided to befriend him—Paul Rudd!

The actor sent him a sweet note and a gift. The pair are even on texting terms now.

“Dear Brody, It was great talking to you the other day. It’s important to remember that even when life is tough that things get better. There are so many people that love you and think you’re the coolest kid there is—me being one of them! I can’t wait to see all the amazing things you’re going to accomplish.” the note read.

With all that has happened, Brody feels more confident now and is already talking about how excited he is for seventh grade.

Cassandra said the kid is on “cloud nine.”