A 13-year-old boy was murdered in cold blood discovering sick pictures in which his dad was seen eating something truly disgusting. Now, the father has been arrested and charged with killing his son after an older brother came forward and told the truth about what his murdered sibling saw. 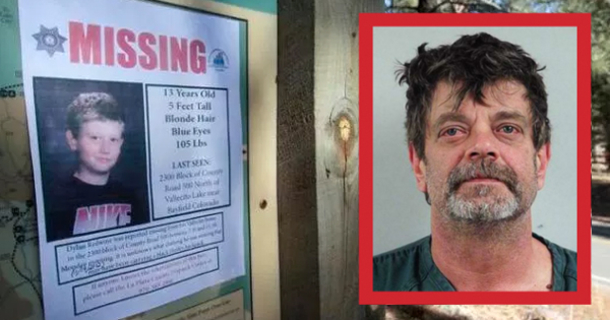 Dylan Redwine’s Missing Poster (left), Mark Redwine (right) (Photo: Denver Post)According to Daily Mail, Mark Redwine was arrested in Bellingham, Washington after a grand-jury issued an indictment for second-degree murder and child abuse resulting in death. Redwine, who worked as a truck driver, is now facing life in prison for murdering his son, 13-year-old Dylan Redwine, during a court-mandated Thanksgiving visit. At the time, Mark owned a home in Vallecito, Colorado, where Dylan reportedly discovered disturbing pictures of his father.

According to local news source ABC7, Cory Redwine, Dylan’s older brother, revealed to investigators what he and his murdered sibling saw. “I have seen the photos. It shows him [his father] wearing women’s clothes and makeup and a diaper and then eating his feces from the diaper. It was disgusting. We couldn’t believe it,” he said.

According to investigators, Dylan reportedly confronted and may have mocked his father for the sickening pictures he discovered. For this, Mark allegedly murdered his 13-year-old son. Dylan’s mother, Elaine Hall, has suffered tremendously and agonized over her son’s disappearance since 2012. She told reporters that she has always believed her ex-husband murdered their son.

“He may have said something that just didn’t set (sic) well with Mark, and Mark reacted in a very violent way…obviously. Dylan is no longer here,” Hall said during a February 2015 podcast. Throughout an investigation that has spanned nearly five years, Mark has denied any involvement in his son’s death.

Some of Dylan’s remains were found approximately 8 miles from Mark’s home in 2013, months after Dylan was forced to visit his father as a result of the court order. Then, in 2015, hikers made the gruesome discovery of Dylan’s skull about a mile and a half from the first set of remains.

Dylan’s parents filed lawsuits against each other over their son’s disappearance and even received national attention when they appeared on the Dr. Phil show in 2013. Mark’s story was that he left Dylan at home alone while he ran errands on the morning his son disappeared. He claims his son was gone when he returned home and said he assumed that Dylan went to visit friends.

Dylan’s mother reported him missing, leading to an intensive search effort. According to police, some of Dylan’s blood was found at several places inside of Mark’s home. A canine also reportedly indicated a “cadaver scent” at several spots inside Mark’s home and his pickup truck. The cadaver scent was also detected on the clothes Mark was wearing the night Dylan disappeared, according to the indictment.

After the discovery of Dylan’s skull, investigators suspected that it probably had been moved from the site of the first remains by a human, rather than wildlife. Forensic anthropologists described injuries to Dylan’s skull to be consistent with blunt force trauma at two locations and said it looked as if a knife was used in the murder. When Dylan’s remains were first discovered in 2013, Mark told the Denver Post, “I cannot wrap my head around it,” adding, “You can never be prepared for something like this.”

Such a tragic and sad story. Let us know your thoughts below!