Home » 17-Month-Old Keeps Throwing Up When She Eats, Dad Learns Mom’s Dark Secret About What She Did To Her 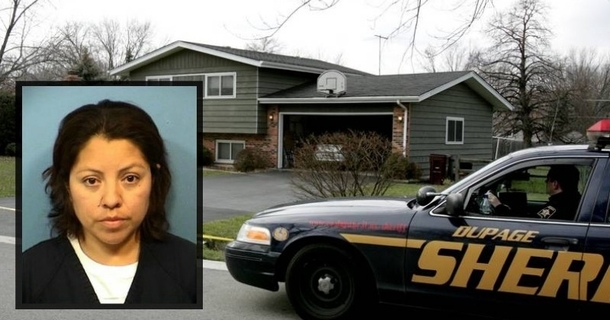 17-Month-Old Keeps Throwing Up When She Eats, Dad Learns Mom’s Dark Secret About What She Did To Her

A loving dad tried to feed his 17-month-old daughter a bottle, however things didn’t go as they usually go. His baby girl started throwing up and wouldn’t swallow, which he thought was very strange because she normally eats pretty healthy.

Seconds later, the father looks closer at his baby and learns what his wife has been doing when no one was around.

The child’s stepmother, 36-year-old Andrea Vazquez-Hernandez, had a nasty little secret that she thought she could get away with until it all caught up to her on May 29. Now, she’s behind bars where she belongs and better not get bailed out by the baby’s father, who should have known how his wife felt about his child before it got to this point.

The girl’s father told Dupage County Police in Illinois that he tried to give his daughter a milk bottle that his wife had prepared earlier that day, but the baby immediately refused it and spit out what had just gotten in her mouth. Allegedly concerned about what was happening with her, he said he took his baby to the hospital, but all medical tests came back normal. When he returned home, he found out what really happened, and someone called the police.

According to ABC7, at some point in the day, Vazquez-Hernandez poured liquid nail polish remover in with the baby’s milk, as if the potent chemical would somehow go unnoticed by both the child and father. Clearly, this could have ended fatally for the baby, but luckily, she reacted the way she did and spit it out, mitigating her evil stepmother’s best attempt to poison her.

Investigators spoke with the victim’s father, who reportedly said that he had attempted to give his daughter milk in a bottle and that she immediately spit it out. The child’s father told police that he immediately brought his daughter to the hospital and all tests performed there came back normal.

Investigators said that at some point earlier in the day Vazquez-Hernandez added nail polish remover to her stepdaughter’s baby bottle.
The woman was arrested and charged with one count of aggravated battery and one count of domestic battery. Her bail was set at $250,000, but in my opinion, the investigation by police and child protective services needs to check in on the father. Although he could have been completely unaware that his wife had it out for his daughter, it seems odd that hate like this could exist in his home without his knowledge of it.

Hopefully, the dad learned his lesson about the woman he married and leaves her to raise his daughter in a safe environment. The child was spared this time, but she may not be so lucky the next time if Vazquez-Hernandez gets her way.