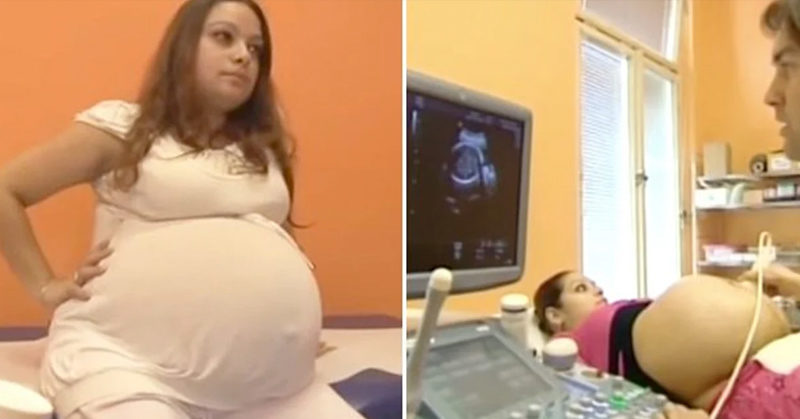 A 23-year-old woman from the Czech Republic gave birth to quintuplets through spontaneous conception!

Giving birth is a miracle, and each tale is different, significant, and beautiful in its own right. A wellspring of pure joy, purity, love, and warmth, the baby becomes the focus of the universe.

Imagine all of it multiplied by five! Alexandra Kinova became the first woman in Czech Republic history to give birth to quintuplets in 2013.

Alexandra and her husband Antonin were expecting their second child after having a son, and they were excited to meet the new addition to their family.

However, they were taken aback when she performed a second ultrasound and revealed they were having twins. They began making arrangements for the new family of five, but they had no idea that their lives would soon change dramatically!

Doctors had to perform a few more ultrasounds after discovering Alexandra’s stomach was fast increasing. They told her she was expecting four babies after various tests and consultations.

After a month of shock, physicians received good news: they had discovered a fifth baby lurking under the other four! Quintuplets were on the way!

The quintuplets were delivered via cesarean section, which is the safest technique to avoid difficulties when there are several babies. According to the specialists at Prague’s Institute for Mother and Child Care, the entire procedure went quite nicely.

The number of persons involved in the surgery was substantially expanded, with forty people on hand for the delivery. Two midwives were assigned to each newborn.

The mother and the baby were placed in intensive care after birth to be closely watched. They all appeared to be in fantastic shape. Alexandra gave birth to four boys, Deniel, Michael, Alex, and Martin, as well as a girl, Terezka.

One thing that did not go according to plan was Antonin’s absence during the birth. He was on the train returning home when Alexandra went into labor and couldn’t make it.

“I was crying the whole way because I was afraid I wouldn’t make it.”

Quintuplets are extremely uncommon. Multiples are almost often the outcome of assisted reproduction procedures. As a result, the chances of spontaneous quintuplet conception are roughly one in 60 million.

They can be all male, entirely female, or a mix of the two, as is the case in most situations.

Alexandra Kinova’s story is even more remarkable because she did not undertake any reproductive procedures. Furthermore, her children are thought to be the first set of quintuplets in Czech Republic history.

According to Dr. Alena Mechurova:

“We have been actively monitoring birth data in our country since 1949, and there has never been a mention of quintuplets throughout that time.” In fact, quintuplets are only born once every 480 years on average in the Czech Republic.”

The family has been spending time together since 2013. Both grandmothers moved in with the family to help support them, and they were showered with help from the community.

People from all around the world gave them assistance once word of their story spread. Eventually, the government decided to send them a nanny to help the family.