Home » 39 Years Ago, Her Father Forbade Her From Being With a Black Man – Today, They Finally Tied The Knot 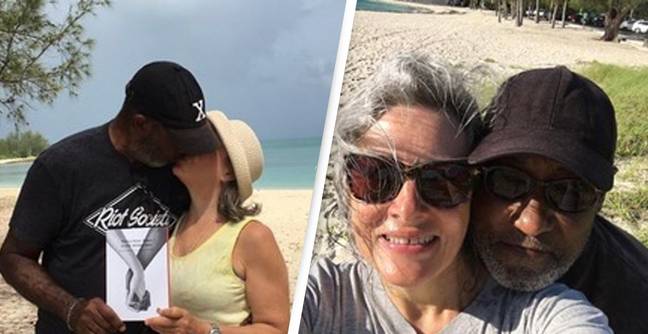 39 Years Ago, Her Father Forbade Her From Being With a Black Man – Today, They Finally Tied The Knot

Penny Umbers and Mark Bethel met in a private school in Nottingham, England, in the late 1970s, and they fell in love.

After Bethel returned to the Bahamas, they kept in touch through exchanging love letters, poems, and paintings.

When it came time for Bethel to go to university, she chose to study in London, while Umbers enrolled in a neighboring polytechnic college so that they could be close to each other.

But, almost out of nowhere, their romance came to an end.

Umbers was heartbroken, and she dropped out of college as a result.

“He was everything to me, and he made me feel so loved, so not hearing or seeing him was unimaginable.” – PENNY UMBERS

Umbers and Bethel moved on with their lives after their breakup. Bethel had a significant relationship that didn’t work out, while Umbers was married and divorced twice.

But in 2019, Bethel was able to hunt down Umbers on Facebook and learn the truth about why he dumped her.

“Mark informed me for the first time what had happened at school when we chatted in 2019,” Umbers stated.

“He’d been conversing with my father in the garden, and I recall thinking they shared a lot of interests because they both enjoyed sports. My father, on the other hand, had told him, “You’ve had your fun, now go on boy.” It crushed him completely; he was such a sweet, lovely boy who was madly in love with me.” – PENNY UMBERS

The threats from Umbers’ father became so severe that he summoned Bethel from class to the vice principal’s office for a stern warning.

“My father told him he knew people in high places and that if he didn’t stop meeting me, his scholarship would be canceled, and that I must know nothing about it,” Umbers claimed.

Because Bethel is black and Umbers is white, Bethel’s parents were also against their relationship.

Bethel said that breaking up with Umbers was a difficult decision for him.

“I fell in love with her the first time we met, and it was like magic.” “I couldn’t believe I was in that circumstance when her father spoke to me,” he told the Birmingham Mail. “I had to make the most difficult decision of my life, and I had to do it alone.” I didn’t have any friends or family to lean on, and I couldn’t explain to her why I just wanted it to end. “It was devastating.”

Bethel looked for Umbers over the years but couldn’t find her.

“Then one day I came across a photo of her outside Windsor Castle in a black suit,” he explained. “I wasn’t sure whether it was her after 39 years.” I wrote her several messages, but she wasn’t a Facebook user, so it took a few months for her to see them. I simply asked, “Is this Penny?” and it was! I was jittery, worried, excited, and giddy.”

The couple, who are now 60 and 61 years old, were reunited in June 2021 when Umbers travelled to the Bahamas to see Bethel.

She returned home after a few months, but Bethel proposed to her on the spot when she returned in October.

“I’ve never loved somebody as much as I adore Mark,” Umbers remarked.

“I’ve regained my confidence,” she added. “I used to be down on myself, but now I’m proud of myself because I know he did love me after all.” It was quite difficult to believe that the man I adored didn’t care for me. I believed if he had told me about it, we might have been able to do something about it, but he was considerably more tolerant of authority and less rebellious than I was. He desired to blend in and succeed, and he has accomplished this throughout his life. But he had to make certain sacrifices in order to do so.”

Even though you’ve undoubtedly read it before on this website, it’s worth repeating: love knows no color, gender, or other distinction. It’s terrible that these two lovebirds’ parents ended their relationship. But, in the end, their bond triumphed, proving that it’s never too late to find your soulmate.