Home » 4-year-old girl was lost in the woods for 11 days! When they found her she wasn’t alone! 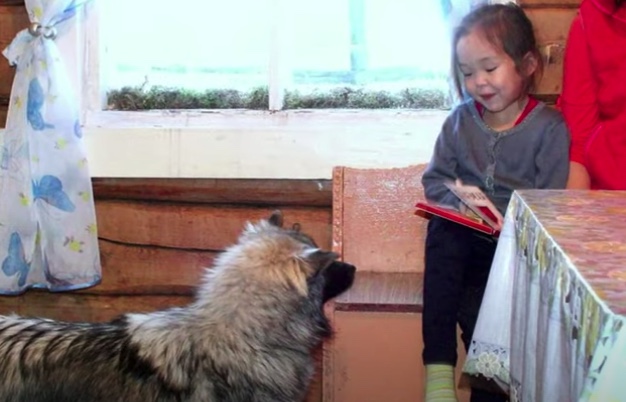 4-year-old girl was lost in the woods for 11 days! When they found her she wasn’t alone!

In July, a four-year-old girl named Karina Chikatova wandered into a Siberian forest and quickly got lost. But thankfully, she wasn’t alone. Karina’s faithful dog, Kyrachon, remained right by her side. At night, he warded off bears and Wolves and cuddled against her to keep her warm in the freezing nighttime temperatures.

Karina lived on fresh berries and water. At first, Karina’s grandmother thought she had joined her father when he left the remote village to find work. But when her grandmother discovered the little girl had not joined him, she frantically called the police. 100 people banded together to search for her by air and land.

Over a week had passed when Kyrajohn finally returned to the village. When the rescuers saw him, they assumed that meant Karina had not survived. But they quickly realized the dog was trying to lead them toward her. In the incredible video below, via the Ministry of Emergency Situations on the Republic side, watch the jaw-dropping moment.

Rescuers finally locate and rescue Karina. Eleven days after she first went missing, rescuers found Karina hidden in a bed of tall grass 4 miles from home. Karina was weak and malnourished, but miraculously, her only injuries were bug bites and scratches. It was her dog that ultimately saved her. The village is dubbed Karina Mobley,

the little boy from Disney’s The Jungle Book who lives and survives in the wilderness. Karina’s Story took the country by storm, and a statue called Girl with Dog was unveiled at Yakutsk Airport as a tribute to the little survivor and the dog that saved her.

What an incredible testament to the loyalty and heritage heroism displayed by our four-legged friends. If you’re impressed by Karina’s story, please share it with your friends on Facebook.