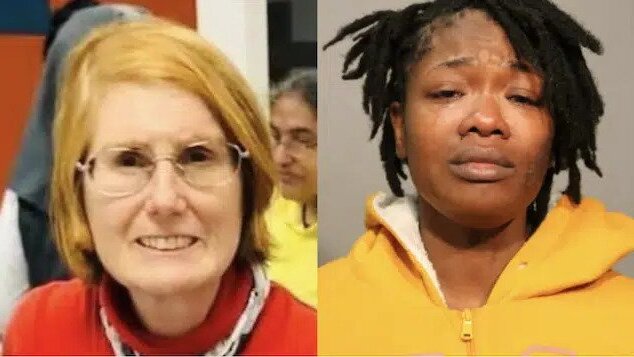 A woman has been accused of dismembering her 69 year old landlord after her remains were found in the freezer of her home in Chicago.

Frances Walker, 69, was found dead inside her white-framed home in the 5900 block of North Washtenaw Avenue – where she rented out her spare rooms to female tenants.

Police believe that one of the renters killed Walker – cutting her into pieces with the aid of ‘large butcher knifes’ and putting her dead body in the freezer.

Around 2:30 a.m. on Monday, tenants at the residence heard Walker screaming. Concerned for their landlord’s wellbeing, tenant texted the 69 year old woman — to make sure everything was OK. They got a text response back, but it was later discovered that the response was sent by the murder suspect — 36-year-old Sandra Kolalou.

Later in the day around 6 or 7 p.m., after not being able to contact Walker all day,  tenants called police to report a missing person.

Other tenants previously complained about suspect

Walker – an avid gardener – often tending to her lawn or walking her pet dog Lukey was suddenly no where to be seen or found.

When officers arrived at the scene, Kolalou was leaving the home and heading to a tow truck that she had called and paid for using Walker’s credit card.

The tenant, upon her arrest refused to talk with investigators, insisting she ‘knew her rights,’ FOX32 reported.

It was determined Kolalou had a previous criminal history for some misdemeanor offenses, police said.

The other tenants made clear to police that they were afraid of Kolalou. Previous 911 calls had been made by some in the home regarding the suspect.

‘Many of the tenants who lived in this house were afraid of this individual,’ said Chicago Police Chief of Detectives Brendan Deenihan.

Based on preliminary evidence, detectives believe Walker was killed in her bedroom and dismembered on the first floor of the residence with the aid of ‘large butcher knives’.

Residents said that they recently saw the suspect – holding a heavy bag – get help from a tow truck driver.

Police tracked down the driver, who told them that the woman he picked up had dropped off the bag in a lakefront garbage can. The suspect had pulled a knife on him, cops said.

Cops then located the bag, and found it with blood-soaked rags.

After finding this evidence, they entered the residence where they made the macabre discovery of Walker’s remains in the freezer.

Added the police chief: ‘When the police arrived, that individual told the police there was another suspect who lived in the residence who the other tenants were afraid of.

‘And that suspect had recently called a tow truck and carried a heavy bag out to the tow truck.

‘Based upon that evidence the detectives were able to go into the residence, and they eventually discovered human remains in a freezer.

‘At that point we backed out of the residence to secure a search warrant.’

Local Miranda Castillo said: ‘I know that she’s very friendly. She’s familiar with everybody else in the neighborhood.’

Frances’ sister-in-law, Maggie Walker paid tribute to the ‘kindest person you will ever meet’ on social media following news of the murder, saying that the family were in shock following the ‘barbaric act.’

She wrote: ‘The kindest person you will ever meet, soft spoken, religious, plays at different masses on Sundays for church services … just a big lose to the family.

‘She was also the sole caretaker of our elder brother Stan, who has mental challenges and lives in an institution. We don’t even know how to explain it to him…

‘We are all in shocked of this renters barbaric act…We, the family hope that this person will be charge.’

Kolalou upon her arrest was charged with first-degree murder and concealment of a homicide.

Victim and husband had planned on retirement

‘The deceased, the owner of the residence, had actually served the defendant with a notice to leave, or an eviction notice … as recently as Saturday,’ he said according to WGN.

‘Music was her thing,’ the victim’s brother, Arnold Walker told the Chicago Tribune.

‘She was a kind and caring person’.

Adding, ‘She was a pillar of the community. She cared for the young and old’.

Frances Walker, according to her brother, began playing music on the cornet before moving on to the piano and the organ, graduated from the University of Illinois at Urbana-Champaign with a music degree and earned a master’s from Northwestern University, also in music. She grew up in Downers Grove, one of seven children. She also arranged music and accompanied choirs in church.

Frances Walker and her husband were getting ready for the next chapter in their lives.

‘They were preparing to retire,’ her brother said. ‘They were deciding where to retire and live when this happened.’

An homicide investigation is ongoing.