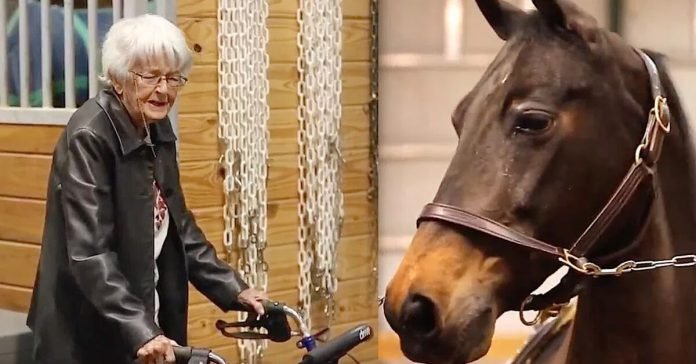 Some of Janet Fauks’ most pleasant memories in life have involved riding Morgan horses.

This equestrian breed is one of the earliest horse breeds developed in the United States.

The 97-year old woman from Oklahoma City knew she didn’t have many years left on this earth.

But she was determined to horseback ride at least once more, putting this objective at the top of her bucket list.

Her family was fully supportive of Janet’s wish, accompanying her to Cottonwood Creek Ranch in the hopes of having her dream fulfilled.

Although the weather had been recently inclement, and Janet had been bedridden in recent weeks with an undisclosed illness, she was determined to fulfill this very important wish to ride a Morgan horse once again.

The Cottonwood staff took Janet into the stables and introduced her to a horse named Stretch.

Both horse and rider took to each other at once and Janet, to the delight of her children, grandchildren and many friends, was able to spend the afternoon back in the saddle again as photographers captured many special moments.

The local TV station KOCO reported that Stretch was the perfect match for the nonagenarian, taking very soft and gentle steps as Janet guided the horse to walk, jog and even get into a leisurely canter known as loping once in a while.

Jaclyn Jacobs of Cottonwood Creek Ranch applauded the family and friends who made one of Janet’s final wishes in life come true, saying that the world of horses doesn’t know any strangers.