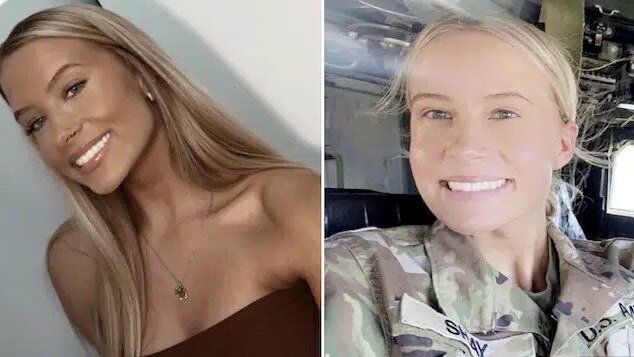 Three other soldiers involved in the accident were treated for their injuries at Hershey Medical Center and have since been released.

The cause of the accident remains under investigation.

Much beloved
The service woman was born in Elizabeth, Pennsylvania, and graduated from Mohawk High School in 2020 before going on to be a student at Slippery Rock University student, New Castle News reported.

Ironically, the much beloved service women was majoring in safety management.

‘It broke my heart to hear this,’ David Bredl, Shay’s former high school cross-country and track coach, told New Castle News. ‘[Mackenzie] was a really smart girl. She was a little feisty and fiery, and always tried to do her best and make her mark. I thoroughly enjoyed working with her.’

According to Bredl, Shay had aspired joining the military while in her junior year. She had a job lined up in Colorado for after college, and loved being in the National Guard, Pittsburgh’s Action 4 News reported.

Shay’s loved ones mourned her unexpected death on social media.

Posted Kyleigh Lasky on Facebook, ‘Mack Shay, we may not have been as close as we once were this last year but you were still at one point my best friend. Thank you for being you and for teaching me so much about myself. Your smile and laugh will never be forgotten. Rest easy pretty girl.’

Lasky later wrote: ‘My heart truly breaks for all of Mack’s friends and family. This is so tragic. She still had so much life to live. But, if there is one thing she did ever teach me, it’s always to live life to the fullest.’

Pennsylvania Gov. Tom Wolf ordered all state and US flags, including those at the state Capitol in Harrisburg, to fly at half-staff in Shay’s honor.

The flags will remain lowered until the date of internment, which has not yet been announced.

Shay is one of many soldiers that have died from training incidents, including 17 year old female soldier, Pvt. Alyssa Cahoon, who died several days after she collapsed during training in South Carolina last month.

The 17 year old woman’s cause of woman had yet to be determined.