Home » A 9-year-old girl hears God tell her to check the bushes. She can’t believe her eyes when she gets closer… 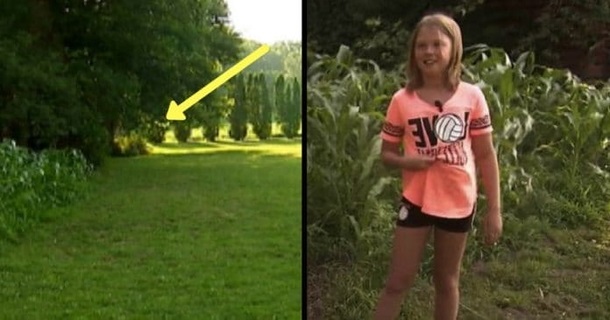 A 9-year-old girl hears God tell her to check the bushes. She can’t believe her eyes when she gets closer…

Elysia Laub was sitting at her home in rural Indiana when she something told her that she should step outside. The 9-year-old first thought she was going crazy, hearing things in her head like voices but he also knows that God comes to people in many different ways, with that thought, she walks outside.

As soon as she decides to go back in the house, Elysia heard a strange noise coming from the bushes closeby. She thought it might be one of her baby pigs escaped from its pen, but when she got closer she couldn’t believe her eyes…

Hidden in the bushes in her family’s backyard was a newborn baby! The umbilical cord was still attached and maggots were crawling all over her, but she was alive.

“I just saw pink legs kicking away,” Elysia said. “I knew it was alive and I knew we had something. I could not second guess myself. I knew we had to get help.”

Elysia ran inside to get her mother, Heidi, who at first thought her daughter had let her imagination get away from her. When she saw the baby, though, she immediately ran to pick it up.

“I ran to the baby and scooped it up and I said, ‘Elysia run to the house and call 911 as soon as possible,’” Heidi recalled. “I got to the house and we put one of our baby blankets around her.”

Police arrived quickly and, after performing a few tests, concluded that the baby had been abandoned at least several hours before Elysia found her. Her delicate skin was sunburned and she was covered with bugs, but otherwise she was okay, thanks to Elysia heeding God’s call.
“[It’s] a miracle that Elysia was out there to find her,” Sherriff John Buncich said.

Heidi agrees. “This is a miracle we found her,” she said. “God put my daughter out there to save that baby. She is fine. This is really a good story.”

The baby was taken to the hospital to recover and then transferred to a foster home. Police later found the baby’s mother, a young teenager who lived nearby. Because she is a minor they cannot release any further details.

Many people are calling young Elysia a hero, but she knows she can’t take all the credit. When asked who helped her save the baby, Elysia very simply responded, “God.”

“If I wasn’t there and God didn’t tell my brain – if my brain didn’t make me go over there, we would find a dead baby in the yard this afternoon,” Elysia said. “It would be much worse and much different.”