Home » A Black Kid Stopped A White Cop, What He Asked Her Left Her Speechless…. 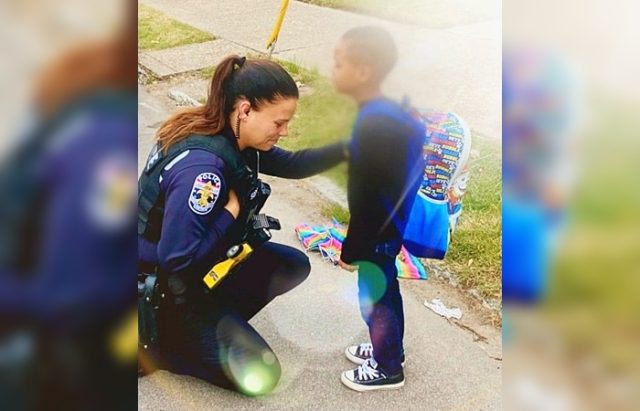 A Black Kid Stopped A White Cop, What He Asked Her Left Her Speechless….

A little boy approached a police officer as he was making his way to school. He did not have a crime to report, but he asked her to pray with him. The memorable moment was caught on camera and went viral.

One day, as LMPD officer Jan Dykes performed her morning patrol, she ended up having the sweetest moment with a student waiting for his school bus. Though the two didn’t know each other, the little boy asked the police officer to stop for the best reason.

“Hey, before you leave, would mind if I prayed with you for your day and my day going to school?” he asked. 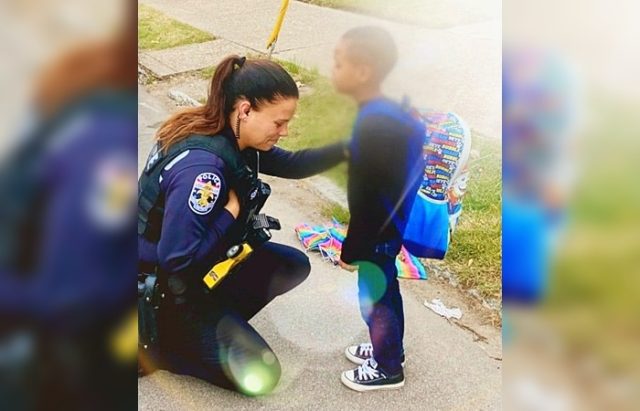 The young boy asked if he could pray for Louisville Metro Police Officer Jan Dykes before he went to school.

Of course, Officer Dykes was more than happy to oblige his request. And the picture of the little boy praying with her is just so amazing.

The police officer bent down and let this precious child pray for her. And she says he did a wonderful job!

Officer Dykes shared the encounter that has stuck with her since. Fortunately, it was also captured in a photo that has been doing the rounds online. Shared by the Louisville Metro Police Department Facebook page, the image is unique.

It features the police officer with her hand on the little boy’s chest. She was kneeling to his level, and her eyes were closed. In a later statement, Dykes revealed what was happening—the boy was praying for her.

“It was great,” she recalled. “He said, ‘I want to pray for this officer’s safety. I made a new friend. I really hope her day goes great, and hopefully, she makes a lot of lives better and going to school and meeting new people.’”

Even though she does not know the boy’s name or where he lives, she wants him to know how much his gesture meant to her.

“It brought a lot of joy to me for him to want to do that for me,” Dykes said.

“Often times people are thinking, ‘How can you go and help them?’ and it’s just nice to see he wanted to do that for me. It made me happy and see someone so young and moldable being so positive and wanting to be that light.”

Dykes returned to the bus stop that same afternoon, hoping to find the little boy who changed her day but to no avail, according to the report. She hopes he, and others, know how impactful a gesture as simple as a shared prayer can be.

I hope these two can find each other again so Officer Dykes can tell this little boy how amazing he is.