Home » A Boy’s ‘Sixth Sense’ Sends Him Outside, He Wasn’t Prepared For What He Found 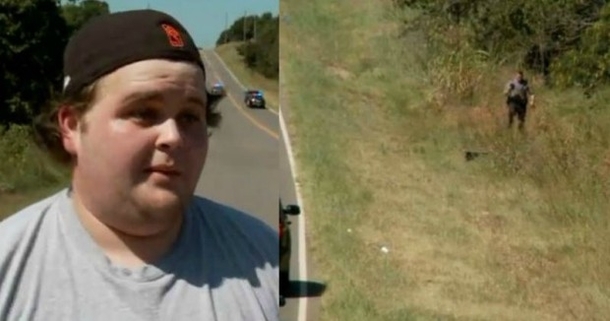 A Boy’s ‘Sixth Sense’ Sends Him Outside, He Wasn’t Prepared For What He Found

On Sunday night, an Oklahoma family was sitting on their front porch, when they heard some disconcerting sounds in the distance. They immediately called police to report it, but when law enforcement arrived, they didn’t find a thing and moved on.

The next morning, the son couldn’t shake the feeling something was wrong out there, so the family went to investigate.

The silence of that Sunday night was shattered by the rumbling of a motorcycle muffler, flying down the road at an alarming pace. Seconds later, a loud screech pierced the air, followed by an earth-shattering crash.

The Boyce’s were sure it was a collision, and by the sounds of things, there were likely no survivors. When police went to the area, they reassured the family that all was well and that there was nothing to see. But what had really happened, took the town by complete surprise, along with one very important detail that was missed.

The Boyce’s went to bed that night, only to wake the following morning to a strong sense that someone was out there. That’s when they took matters into their own hands. “This morning, my brother couldn’t shake the feeling that somebody was out there hurt, someone could be dying,” Ryan Boyce said later in the day Monday. “He drove out here by himself and found the accident and immediately called the police.”

The family found a small flipped car that had clearly been involved in a collision. Off in the distance, were two dead bodies, later identified as 29-year-old Tera Mattingly and 8-year-old Zoey Mattingly, but their work wasn’t done there with this tragic discovery.

The Boyce’s called officers to come back to the scene they overlooked the dark night before, and that’s when softer sounds were heard coming from the scene.

A third passenger, a 9-year-old girl, had remarkably survived the massive wreck and was found alert and able to talk to paramedics, who removed her from the fatal scene and rushed her to the hospital. The sole survivor had sustained a few broken bones but is expected to make a full physical recovery — emotional healing may be a different story. She’s currently in serious condition at OU Children’s Hospital, KFOR reported.

Ryan is eternally grateful that his brother spoke up and didn’t ignore the nagging feeling to look into what he knew in his heart happened late Sunday night. “They could still by laying out there, and that little girl could be dead now,” he said with gratitude to have been a Godsend to this little girl who may not have made it another day out there alone. “We could’ve been there at the last minutes of her saving point,” he added.

The Boyce’s don’t know this family and have since learned from police that Tera’s husband had reported the three missing over the weekend from the nearby town of Moore, Oklahoma. An investigation is still reportedly ongoing as to what caused the fatal collision. “I’m just praying for that family whoever they are, I don’t know who they are yet, but God bless you,” Ryan told the local news outlet.

Had it not been for this faithful family, listening to what God put heavy on their hearts, the situation could have very well ended in three deaths. These people were all this little girl’s heroes that day, good Samaritans that can know that God used them for His glory and to save this child. Her life was spared that night for a reason. She has a purpose to fulfill on this earth, and God has a plan for her.