Home » A Member Of The Royal Guard Caught On Camera Passing Out And Falling On Their Face…. 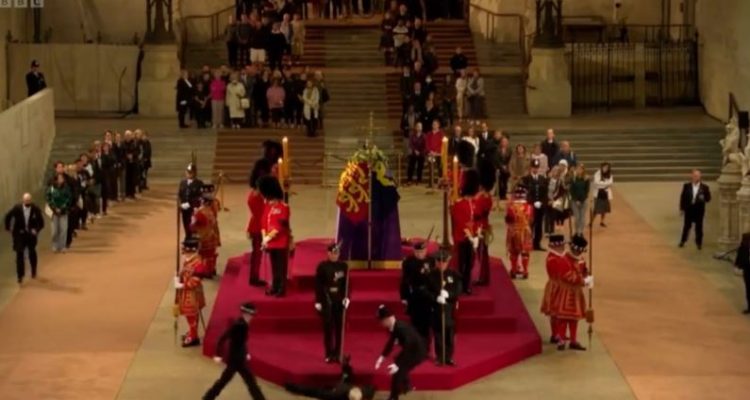 A Member Of The Royal Guard Caught On Camera Passing Out And Falling On Their Face….

A royal guard keeping watch over the Queen’s coffin at Westminster Hall fainted just after midnight in London amid a queue of onlookers.

The unnamed royal guard fell off the podium in full view of the cameras. The Livestream from Westminster Hall showed a black-clad guard holding a ceremonial staff falling facedown, and two others rushing to help him.

The cameras immediately cut to the exterior of the building, and then were briefly suspended as thousands of mourners continued to file past the late monarch’s casket.

A Royal guard at the Queen’s coffin during the Lying-in-State has collapsed. The Guard nearly collapsed moments earlier. pic.twitter.com/xDXVlBx4bL

The Queen’s coffin is placed on a catafalque, or a raised platform, while soldiers in ceremonial uniform will maintain a 24-hour vigil till September 19.

Members of the Sovereign’s Bodyguard and Yeoman Warders of the Tower of London are required to remain completely still at the four corners of the catafalque.

There was no official update immediately available on why the guard collapsed, and what happened to him afterwards.

Shocked viewers also took to social media with one tweeting: “He must’ve been so overwhelmed with what was happening.”

Another said: “Bless him – just happened to tune in; saw he was a bit wobbly and feared he’d faint. Hope he’s ok.”

Similar comments included: “Poor man, I hope he’s alright. It was awful to see” and “It’s such a massive responsibility during such a historical moment. I hope he’s fine.”