Home » A Pilot Suspected Something Wasn’t Right, When He Went To Take A Look They All Scattered! 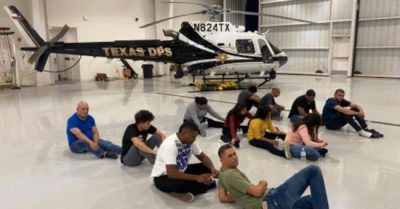 A Pilot Suspected Something Wasn’t Right, When He Went To Take A Look They All Scattered!

An attempt to smuggle people using an airplane was stopped by the Texas Department of Public Safety.

The incident happened on Wednesday, a press release states that just after 5:00 pm, a DPS pilot was conducting a ramp check on a Gulf Stream IV aircraft as he noticed a group of people being dropped off at the airport. In the terminal, he also saw what he described as suspicious activity.

The DPS pilot then encountered Maximo Diaz-Jorge, reportedly responsible for chartering the plane. But Diaz-Jorge informed the DPS Police Pilot that the group he was traveling with consisted of individuals who worked for an oil company and were headed to Houston to attend a sporting event, during the initial investigation. However, after the DPS official asked for identification from the individuals, all of them ran, officials say.

While the individuals tried to flee the area, Andreina Felix, who was among the group of people, hit the DPS pilot. On the other hand, Diaz-Jorge, Felix, and the 13 migrants attempted to board the plane but fail when the DPS Highway Patrol troopers and Special Agents moved in to assist and were able to stop them.

“Upon arrival, Texas Department of Public Safety (DPS) troopers requested assistance with two vehicle pursuits that was initiated at the airport,” the release states.

Allegedly, Diaz-Jorge and Felix were conspiring to smuggle the 13 migrants into the interior of the United States further investigation revealed.

The 13 migrants were referred to the U.S. Border Patrol, among the illegal immigrants are from the Dominican Republic and El Salvador, in total, there are eight males and five females.

One of the immigrants allegedly claimed to have paid $11,000 overall to be smuggled, of which $7,000 was for entry into the country and the remaining $4,000 was for smuggling by the airline.

Felix is a Dominican national who was the alleged getaway driver, the 29-year-old was detained and charged with smuggling people and aggravated assault on a public official and was brought to the Hidalgo County Jail, where she will be charged.

Meanwhile, the person who charted the plane, Maximo Diaz Jorge, 40 and also from the Dominican Republic faces human smuggling charges, but he was transported to a hospital after experiencing a medical emergency. The remaining suspects were taken into custody by U.S. Customs and Border Patrol. DPS Criminal and the Texas Rangers say that the incident remains under investigation.