Home » A Sick Thug Tried Holding Up A Houston Diner, And Learned Why You NEVER Mess With Texas…. 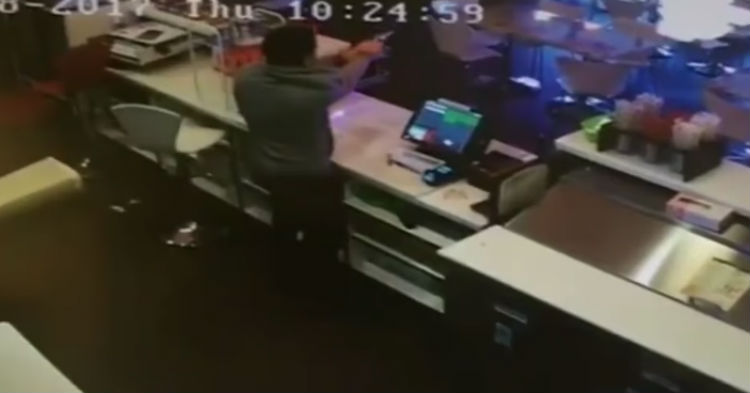 A Sick Thug Tried Holding Up A Houston Diner, And Learned Why You NEVER Mess With Texas….

During an attempted robbery at Bambu Desserts and Drinks in Houston, the cafe’s owner was able to take away the gun belonging to the suspect before firing several shots at him.

Video footage of the incident shows the robbery suspect hitting the owner at around 11 a.m. on Thursday. After a commotion, the owner then wrestles the firearm away and fires about six shots.

According to reports, 3 days after Christmas a group of three young men who the employee recognized from a couple of days earlier – reappeared at Bambu Desserts & Drinks with bad intentions. Two of them waited outside as the main suspect walked into 3010 Gears Rd. location with a gun in his possession. Upon entering the premises the suspect drew his firearm and demanded that the victim empty a safe.

The café owner proceeded to begin unlocking the safe, but noticing that the robber was holding the weapon close to his stomach, he selected to make a grab for it instead. A scuffle then ensued and within moments the clerk managed to wrestle the gun away. He would fire off six shots that shattered the glass storefront but did not hit any of the fleeing suspects.

The owner, who wasn’t identified, told News Fix that he was fighting for his life.

“I thought I was going to die. He told me he was gonna shoot me,” the owner said. “The gun could’ve went off, and it would have shot into my stomach. And that’s a .357, so I would have been dead.”

With the help of a helicopter deputies from the Harris County Sheriff’s department were able to track the three suspects in a nearby neighborhood soon after the robbery attempt.

The café owner later blasted the robber calling him an “idiot” because he messed with a Texan.

“The guy’s an idiot. He even told the cop, he was like, when the cop grabbed the gun from the counter and he brought it into the car, he said the suspect said, ‘Can I have my gun back?’”

Fortunately, no injuries were reported. A window was shattered in the incident, ABC13 reported.

The three suspects, including the man who attempted to rob the cafe, were arrested a short time later. Their names and the charges were not released to the media.

Watch the video report below for more details: