Home » A young woman invited a hobo to sit at a cafe with her. In one hour, her life changed completely.. 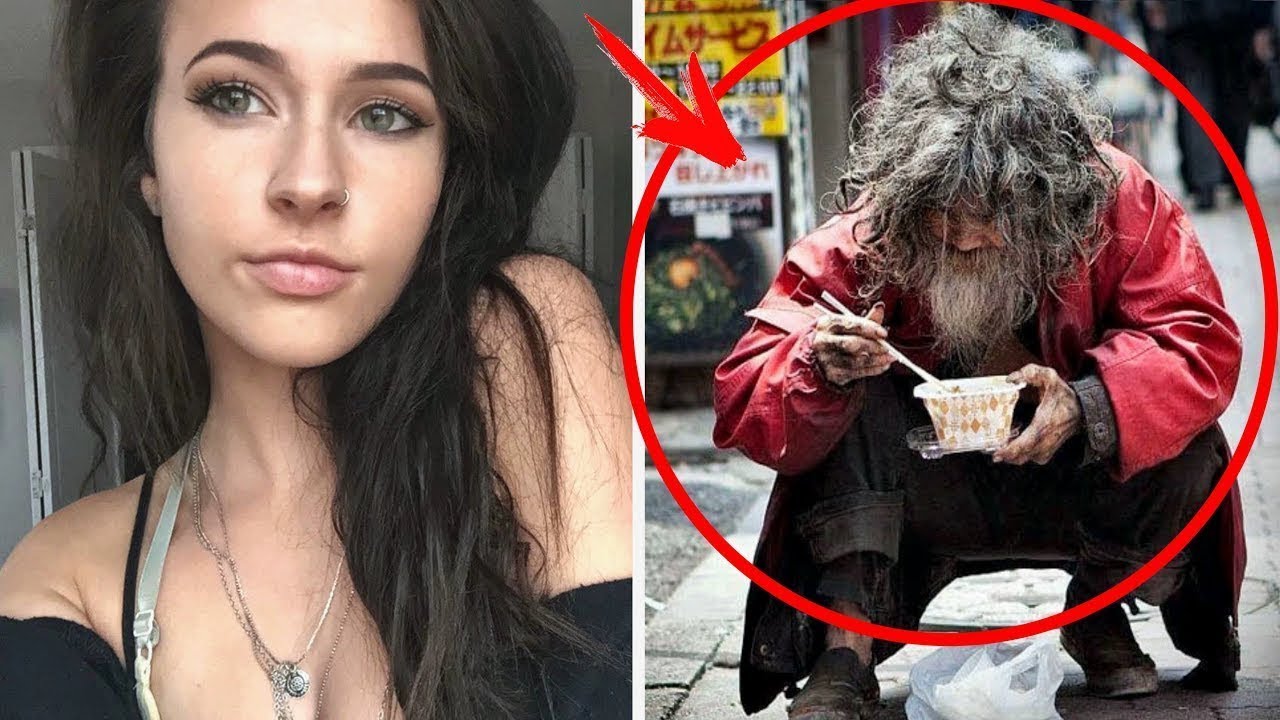 A young woman invited a hobo to sit at a cafe with her. In one hour, her life changed completely..

Hello friends. I think at this point everyone noticed or even felt the speed with which social inequality took over our world. Unfortunately, today only a small percentage of people have a median income. The majority of people are either extremely, extremely wealthy, or way below the poverty line. I don’t think it’s a secret that despite the fact that the world is constantly developing and improving, there are still many people who live on the streets all over the world.

Maybe some of them chose this lifestyle, but most of them likely ended up on the streets because of difficult life circumstances that even the most powerful people may not be able to rectify. Such people sleep on park benches and look for food and dumpsters. They are happy in those rare cases when people pay attention to them. The sight of homeless people often discussed average passersby who look at the homeless with contempt. But friends, there are also those people who want to help everyone and it doesn’t matter if that person is poor or homeless.

As proof of this, I will tell you a story that occurred a few years ago and melted the hearts of millions of people across the world. It was a regular day. It rained a little so Casey Fisher went into a fast-food restaurant to get herself a cup of coffee in order to warm up a little. The little woman looked out the window and was lost in her own thoughts when she noticed a homeless man collecting change from the ground. Soon the man walked into the restaurant wearing his old and not-so-clean clothes.

He entered the restaurant slowly and stood by the door counting the change that he managed to collect that morning. The customers quickly noticed the man and began whispering among themselves and pointing at him. Casey too looked at the man, but she did so without contempt but simply studied his facial features. Casey thought that the man’s eyes were full of sadness and sorrow. Casey quickly realized that the man likely did not have enough money to buy himself food, so she called him over.

It is important to note that Casey always had a different outlook on homeless people. Instead of disgust, she felt compassion and gave them change whenever she had the chance. Are you hungry? How are you feeling? Casey asked the homeless man.

The young woman not only asked about the man’s well-being but also offered him a sandwich and a coffee. The man was surprised and took a step back from Casey. I’m sure that people do not start conversations with him often. Since he was hungry, he took up Casey on her offer. If it wasn’t for her, he would have likely left the restaurant hungry.

After the man received his order, Casey spoke to him again and offered for him to join her since she was alone at the table anyway. Of course, the request surprised the homeless man. Most often, people tried to avoid him, but in this case, he was offered food and even a place to sit. The man thought for a second but joined Casey. In the end, he behaved timidly because he did not know what to expect.

But the young woman reassured him that everything was fine and that he had nothing to fear. She wanted to treat him to some food and to speak with him a little. They struck up a conversation. Maybe Casey was too intrusive in her questions, but the man didn’t mind and told her practically everything about himself. It turned out that the homeless man was named Chris.

He told the young woman how he ended up living on the streets. Chris began his story by telling Casey that he never had a functioning family. His dad liked to drink and rarely pay attention to him except when he hit him or his mom, which happened often. Chris ran away from home because he could no longer bear to live with a tyrant. Chris left home because he could no longer stand his dad’s physical and emotional abuse, but life on the street turned out to be no better.

The other homeless people were not kind to him. They took away his food and bullied him. Chris did not want to remain homeless. He wanted to change something about his life and get out of the situation in which he found himself. But doors closed on him everywhere he went.

Chris said that he looked for work for several years but was rejected each time an employer found out that he was homeless. Despair and disappointment brought him to drugs. Not a single person was willing to help him, but he would have definitely accepted help if it was offered. Everyone shied away and bypassed Chris. He would have loved to have a job, but nobody was willing to give him a chance.

On top of all this, he was also upset by the fact that his loyal friend, a dog named Joe, died a few days prior. He was the one who always supported Chris and provided him with the company during the long and cold evenings on the street. Throughout his entire life on the Street, Chris hoped to return to Normative life and become the person his mom would be proud of. But Alas, it seemed like this was not meant to be. The homeless man recalled that soon after he ran away from home, his mom passed away.

From that moment on, he truly felt that he had nobody to rely on. It is also important to note that Chris seemed very smart. He spoke and reasoned like a well-mannered and mature adult. The man was very sad that this was how his life turned out, but at some point, he decided to just go with the flow. Casey listened to his story without interrupting him, but inside she was experiencing a whirlwind of emotions and was barely holding back tears.

She wanted to be sympathetic to Chris’s story but not to offend him with her pity. Kris talked and talked. On that day, he poured out his entire soul. Casey and Chris talked for about an hour. The conversation could have lasted even longer, But Casey had to go.

Cassie recalls that when she got up to leave, Chris asked her to wait a little bit. He went to the counter, Asked for a pen and paper, and wrote something down. Afterward, he approached Casey and handed her the note. After giving her the note, Chris thanked the young woman for the food and apologized for taking up a lot of her time. At that point, their fateful meeting ended.

After leaving the restaurant, Casey took out the note to see what was written. When she unfolded the piece of paper, she could not believe what was inside. The note from the homeless man read I wanted to kill myself today, but because of you, I now do not. Thank you, beautiful person. Cassie could not control her emotions and tears rolled down her eyes.

What is the value of human life? It is not the cost of a sandwich or an hour of free time. Casey was able to do so much for this stranger in a very short time. It would seem that Ernest’s conversation is a trivial matter, but it is likely that without it, Chris would no longer be alive. A little bit of simple human interaction with an empathetic young woman helped the homeless man understand that there are good people in the world.

It gave him strength and pushed him to fight against the obstacles that life presented him with. Maybe he will even be able to start a new life. After meeting the homeless man, Casey posted a touching story on her social media. She did it because she wanted to inspire other young people to act kindly. She wrote that she hasn’t seen the homeless man since that meeting and hoped that he began a new life.

This seemingly simple story is very educational. The world is full of all kinds of people. Some are rich, some are poor and some even live on a park bench. But you should never judge a book by its cover. Each one of us has a unique story that determines our life.

Not everyone is destined to live well. For some of us to go to work, to spend evenings in front of the TV, and to eat good food is mundane. For others, it is something that they can only dream of. This story shows that a small act of compassion can not only change a person’s day but his or her entire life. Remember this and act kindly every day.