Home » Adopted Woman Discovers The Unexpected Truth About Her Birth

Adopted Woman Discovers The Unexpected Truth About Her Birth

In October 1995, Morgan Hill, who was a newborn, was left for dead by her mother in a dumpster in suburban Hoffman Estates. She was rescued by a construction worker who was dropping off garbage.

Hill was wrapped in a garbage bag and left in a Chicago dumpster when she was an infant, KSHB reports. Hill learned the news about what happened to her when she was a baby from her mother, Sandi Hill, who sat Morgan down after her 18th birthday and told her what happened in 1995 and it shocked her beyond belief.

“She could barely get it out,” Morgan said. “She was basically already crying before telling me.”

According to KSHB, the story goes like this: Morgan’s biological mother hid her pregnancy, and delivered the baby quietly at home. She immediately decided to get rid of the baby by tying it up in a garbage bag and dumping the bag in the trash.

A local construction worker, Garold Hyatt — known to his friends as “Rocky” — happened to walk by with a last load of trash. But before he tossed the bag into the dumpster, he heard a noise — what sounded like the whimper of a baby.

Spooked, Hyatt rushed to a nearby hospital, where three nurses came running to assist him. One of the nurses opened the bag and there was a baby inside.

Morgan says she has known she was adopted her whole life, but did not know the entire story until her mother told her two years ago, WMAQ reports.

See the original news video below from when Morgan was found as a baby.

Sandi had been saving press clippings and photographs for years, in anticipation of the day she would have to explain to her adopted daughter how she came into the world. The articles describe how police eventually found Morgan’s mother, who was in jail at the time awaiting trial, and how her biological father never even knew there was a baby until she was named in court. 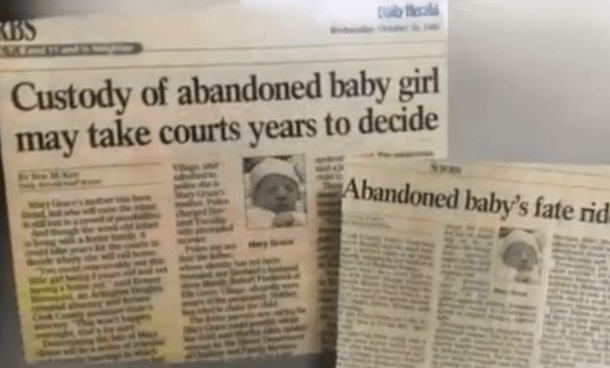 KSHB tracked down Rocky, the construction worker who saved Morgan’s life. The two were reunited and there were tears of joy and hugs all around.

“I broke into tears and the first thing I said was, ‘thank you,'” Morgan recalls. “He said to me, ‘baby girl, you are so loved.'”
Rocky then gave Morgan an angel pin he had been carrying for the past 20 years, reports WMAQ.
“I’ve worn it every day since,” Morgan says. 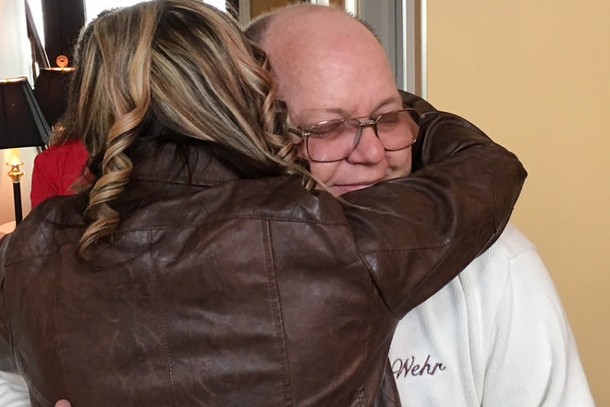 Now she wants to use her story to help save others with a similar fate. “He gave me a chance to live a second life,” Morgan told WMAQ. “Because if he didn’t find me, I would not be here to help others and show soon-to-be mothers that there are so many options out there and you don’t have to throw your baby away.”