Home » After Learning That An Elderly Woman Lives In Her Car, The Neighbors Help Her 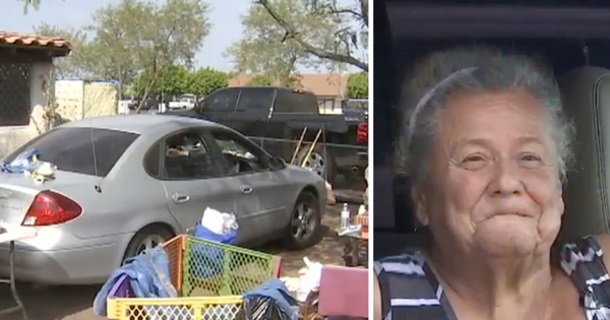 After Learning That An Elderly Woman Lives In Her Car, The Neighbors Help Her

An elderly woman had a house in Phoenix, Arizona, but it sadly had started to not feel like a home to her. A woman by the name of Theresa Hernandez was 71 years old and living in her car on the front lawn in front of her home back in 2017.

She had been living at the house for more than two decades but ultimately decided to live in her car instead. Her neighbors were shocked to find out what the conditions of her home looked like and even more surprised to find out why Theresa had relocated in the first place.

Theresa’s home had no running water or electricity, and it appeared as if it hadn’t been cleaned in a very long time.

Her yard was just as messy with garbage piled up everywhere. It looked like the entire place had been abandoned, and yet Theresa was still living on her property; she just lived in her old car rather than in her house.

It was clear that the 71-year-old woman needed a helping hand with taking care of her property, but she didn’t have anyone to turn to. Fortunately, one of her neighbors by the name of Justin Hernandez became aware of the situation and immediately knew that he needed to take action.

He lived across from the elderly woman and was heartbroken after hearing her story. Teaming up with plenty of other neighbors as well as several volunteers, Justin began working day and night to help make Theresa’s house finally feel like a home once again.

In September 2017, FOX 10 reported that Theresa finally got the help she desperately needed from some kind-hearted neighbors. Justin had moved into the house across from Theresa about a month prior and noticed that she seemed to be living in her car. “It broke my heart,” he said, as he was concerned about how the elderly woman slept in such hot weather every night. Justin continued, “I figure if this was my nana or my mom, I wouldn’t want her to live like this, so I had to do something to help get her back into her home.”

Upon further inspection, Justin found that the inside of Theresa’s home looked like it could be shown on the TV series “Hoarders” based on how messy and unlivable it was. Both Theresa’s house and front yard were littered with trash. Theresa explained that she struggled to take care of her house and her two dogs after her husband passed away.

It was clear that she needed help, and Justin was willing to do just that. He created a Facebook page to gather as many people as possible to come out and clean Theresa’s house and yard. The act of kindness spread, and even out-of-towners came to lend a helping hand.

Theresa and Justin’s story have inspired people from around the world.

“That guy is amazing to go out of his way and all others to help this poor lady. God bless him for the beautiful heart of someone like him. We need more people like him with more positive than negatives,” Alma Delia Chavez added.

With that said, other viewers were concerned that Theresa needs psychiatric help, with some speculating that she might suffer from hoarding disorder. According to the American Psychiatric Association (APA), people with hoarding disorder have a desire to save their possessions, and consequently, they impulsively hold on to stuff that others might throw away. “Acquisition of objects in people who hoard is largely impulsive, with little active planning, and triggered by the sight of an object that could be owned,” the APA writes.

“She needs counseling as well or it will end up the same way again 😕 ,” Jess Kindt wrote.

“Hopefully some of the funds collected will go to therapy. Typically if you just empty out someone’s house that is a hoarder. They will fill it right back up. I’m so glad there are still people out there that help others!”

In any case, Theresa and Justin’s story shows how important community is. No matter how down and overwhelmed someone may be, a helping hand goes a long way.