Home » After Plane Gets Delayed 45 Minutes On Runway, Woman Takes Photo To Show What Crew’s Up To 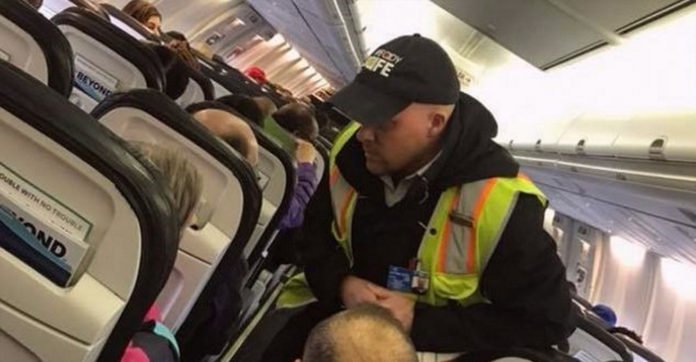 After Plane Gets Delayed 45 Minutes On Runway, Woman Takes Photo To Show What Crew’s Up To

A delayed flight is usually a nuisance to passengers, but in this case, it was a sign of compassion, patience, and understanding. Kristen Wiley wasn’t sure why her flight was 45 minutes delayed as she sat waiting for it to take off, but when she looked over and saw why, she couldn’t help taking a picture and sharing a post about it on Facebook.

An elderly woman with dementia was suffering from immense confusion as to why she was on the plane. She didn’t understand where she was and was tightly cuddling her emotional support dog as her husband tried to reassure her. Then, a security guard approached, which was probably even more intimidating for the woman – but he wasn’t there to harm her.

The guard crouched down gently in front of her and began to discuss with her and her husband what the next best step was. Flight attendants and staff looked on cautiously so they could formulate a plan that would work for the woman, her husband, and their dog.

After some discussion, the staff decided that they would set up the family at a hotel for the night – free of charge, and with free transportation to and from the airport, and a new flight ticket to try again the next day. The woman was then kindly escorted out of the plane.

With the bad reputation that many airlines get for handling situations like these badly, the outpouring of compassion that Alaska Airlines staff had towards this woman is truly touching. We hope that tomorrow is a better day for her and that they will be able to enjoy their next flight more smoothly!