Friends of a criminal are threatening retaliation on social media after a fed-up Arkansas grandpa delivered instant justice to an armed punk who he found invading his home in broad daylight.

According to local news source KSLA, the horrific home invasion took place at approximately 1:30 p.m. on Thursday, November 2, 2017, in Genoa, Arkansas. Miller County Sheriffs said that the 81-year-old man was at home when he opened his garage door to discover an armed man pointing a gun at him. This is when things took a turn for the worse.

Unfortunately for the man, this elderly gentleman had armed himself and was ready to defend himself. “I walked outside the door, and he was standing right there with a big pistol. I had my hand in my pocket on my pistol, and the battle was on,” said Buddy Cates, in an interview with a KSLA reporter. Cates, who told the reporter that he had been robbed 6 times in the last 10 months, wasn’t about to let it happen again.

This is when Cates says he and the criminal opened fire on each other. The horror of that moment when Cates was forced to defend his life is unimaginable, but the consequences of not being prepared to do so are much more daunting — and thankfully, this homeowner was prepared.

Cates said that he and the assailant, who has been identified by his friends and family on social media as 18-year-old Shemar Harris and also goes by “Pablo Bouta’bag Harris” as well as “Marblow DiNero,” exchanged nearly 15 rounds. Cates was unharmed after the gun battle, but the assailant ran out of luck. Harris was shot at least once and died a short time later at a nearby Texarkana hospital.

“Whoever got the biggest gun and fastest will be boss when it is all said and done. … In this case, it was me,” said Cates. When deputies from Miller County Sheriffs Office arrived, they interviewed the homeowner and took two firearms as evidence, according to TXK Today. No charges have been filed against the homeowner.

However, almost immediately, people who knew Harris started posting comments on Facebook about what a great guy he was and how they couldn’t believe he was actually dead.

Another Facebook user named Jessica Green memorialized Harris by posting a newspaper article from Harris’ previous arrest on Saturday, August 5, 2017. Harris was arrested by Texarkana Texas Police after he robbed a sporting goods store of a few boxes of ammunition with a stolen gun. 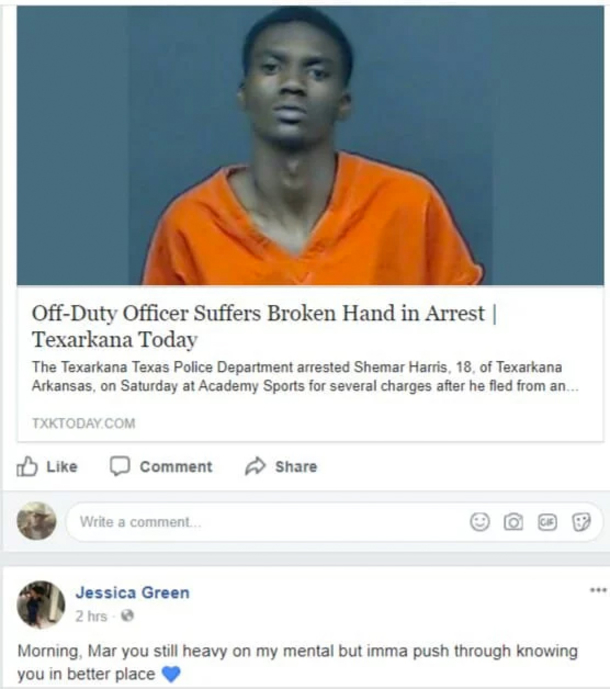 Harris was reportedly confronted by an off-duty police officer inside Academy Sports after employees asked for help when they noticed Harris was trying to steal several boxes of ammunition. Officer Alan Bailey was off duty and shopping at approximately 1:45 p.m. that Saturday when he was asked to intervene. Bailey identified himself as a police officer and asked Harris to remove everything from his pockets.

Harris then ran from the store and across a parking lot as Bailey gave chase along with a couple store employees. A bystander who was walking nearby with his son also joined in the chase when Harris almost knocked his son over. Harris reportedly pointed a gun at the man’s face and told him to back off. Regardless, the man pursued Harris and was able to tag team him with Officer Bailey to take him into custody. Bailey reportedly punched Harris in the face one time during the scuffle and suffered a broken hand.

Harris was then transported to the Bi-State Jail, according to TxkToday.