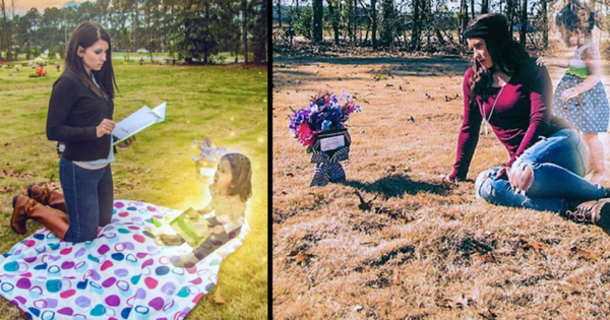 Jeanie Ditty was a strong soldier in the United States army residing in Fort Bragg where she was station. Sadly, her 2-year-old daughter Macy passed away in 2015.

Jeanie informed the cops that her daughter Macy choked on her vomit after she consumed a rotten banana that made her extremely sick.

To celebrate her daughter, only a month later, Jeanie chose to put together photo shoot. She spent the entire day at the cemetery that her daughter has been buried, taking very heart touching photos at her gravesite with her boyfriend.

Later on, a photographer in Pennsylvania later edited the images via to place her deceased daughter into the photos, free of charge. The stunning images made it look as though Macy was an angel standing right by Jeanie’s side.

It wasn’t long before the beautiful and bittersweet photos went viral, touching hearts around the country. Viewers offered the grieving mother support, condolences, and even donations for Macy’s funeral expenses.

But what the public didn’t know was that authorities were in the midst of an investigation about Macy’s death — and the horrifying and shocking truth was about to change everything.