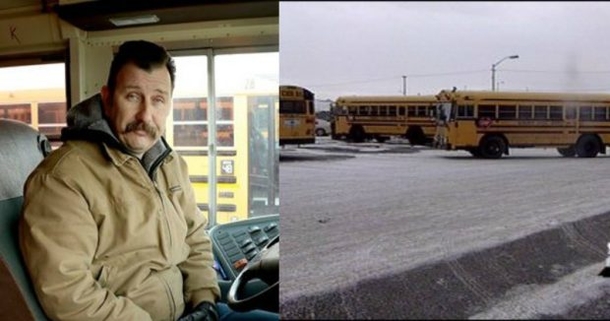 John Lunceford has driven a school bus for the last three years, with nothing unusual on his daily route while taking kids to school. However, that changed recently, as well as his life, when the doors of his bus opened and he saw what was waiting for him on the street corner that’s affected the whole town — not just John.

To keep himself busy and make ends meet, John got a job with the Kennewick School District in Washington state, transporting kids to and from school.

His duty to the town today is a far cry from his time heroically serving our country, but doing what he can for others is a part of who he is since that’s a characteristic of anyone who signs up for the military in the first place. When the doors of his school bus opened on Thursday and he saw what was happening on the other side, he acted with the instinct ingrained in this man and got a surprising response in return.

When John arrived at one of the bus stops where kids were waiting for him, he saw that one little boy was crying. His little hands and ears had turned red, and he was shivering in the freezing cold winter weather which he wasn’t at all dressed appropriately for.

The veteran did what comes naturally to a hero like him and took off his own hat and gloves to give to the boy to warm him up, offering repeated assurance to the child that he’ll be okay now.

“I put my gloves on his and told him, ‘It’ll be OK, it’ll be OK,” John told the boy, according to the Kennewick School District’s social media post. However, he didn’t stop there. John saw a bigger issue and knew he could be the solution for it.

Despite his fixed income and modest wage he earns as a bus driver, he went to a nearby store and bought ten hats and ten gloves in black and pink, then returned to the school to track the boy down who he had just helped.

“I’m a grandfather, you know. No one wants a kid to suffer like that,” he said about helping the child again by giving him his own pair of gloves and a hat so he wouldn’t ever have to be cold again. He keeps the other accessories like this on hand in case another cold child comes on his bus, he’s prepared for them.

John served our country with the mindset that no man is left behind, and now that he’s home and years into retirement, that motto hasn’t changed. No child should be left behind or in the cold, and John is doing his part to ensure that they are safe and warm. He has been recognized for his efforts by a school district that is proud to employ him and parents who trust him daily with their children.