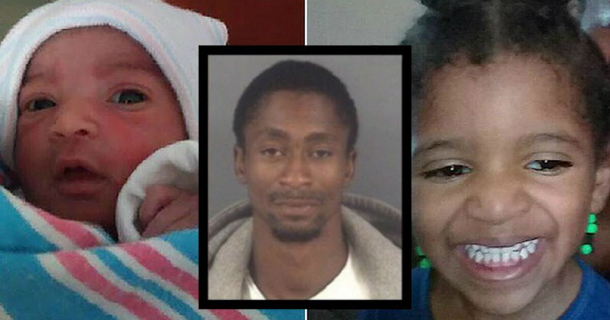 Genesis and Serenity Freeman, who were only four-days-old and two-years-old, were recently found after being reported missing. Authorities in Hoke County North Carolina managed to locate the little girls but made a startling and gruesome discovery in the process. This is so vile that it will turn your stomach.

A Fayetteville, North Carolina man, identified as Tillman Freeman and the father of Genesis and Serenity, was the last person to be seen with the young girls before they went missing. After getting in a fight with the mother of Genesis and Serenity, Tillman took off with both girls. However, on Friday, Tillman refused to help police at all and wouldn’t tell authorities where the little girls were located.

Tillman accused his wife, who is the mother of both girls, of having affairs and even said that neither Genesis or Serenity were really his daughters. Tillman’s wife claimed that during an argument in which Tillman accused her of seeing other men, he got so angry that he left with the Genesis and Serenity.

“From what our investigation’s telling us, they had a dispute, where [Tillman Freeman] allegedly made accusations about the babies not being his, a child not being his or maybe her involvement with someone, and when he took the kids, we understand he left in a rage,” Hoke County Sheriff Hubert Peterkin told ABC7 sister station, WTVD-TV.

When authorities picked Tillman up after the girls were reported missing, he refused to say where they were, and police began to get on edge. An infant and a toddler are not able to sustain their own lives without adult assistance so authorities were rightfully concerned. They went ahead and charged Tillman with two counts of child abuse and neglect for his treatment of the little girls and maintained hope that they could find both girls alive. However, everyone’s worst fears were realized when the girls were finally discovered.

“It’s kind of hard to find the words to describe what this feels like,” said Peterkin. “I know people read it, I know people see the story and hear about it, but to be out here on the scene and actually see this stuff, to see these children lifeless and brutally stabbed. I don’t care how many years you’ve been in it. How many times you’ve been in it or seen things, this was not a good experience. Everybody’s taking this real hard. Our heart goes out to the family, to the mother.”

After the mother of Genesis and Serenity heard of the violent and disturbing way her daughters had been killed, she attempted suicide and is now recovering in a hospital.

Peterkin discovered both girls lifeless and stabbed multiple times and left in a car, which was parked in the wooded area of Raeford. Tillman violently stabbed a two-year-old toddler and a four-day-old baby girl to death. There is no amount of punishment big enough for a person who is that horribly disgusting, morally depraved, and psychotically deranged.