Home » Baby’s left alone in the shower while dad gets dressed. But that’s not the only place the baby was left alone that day 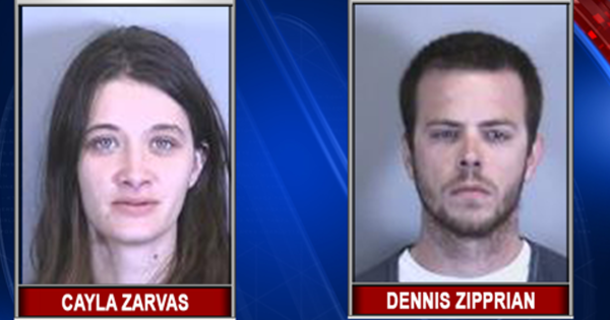 Baby’s left alone in the shower while dad gets dressed. But that’s not the only place the baby was left alone that day

Two 24-year-olds in Bradenton, Florida, Cayla Zarvas and Dennis Zipprian have been arrested after abusing their 10-month-old baby.
The child’s horrifying tale begins on the night of Sunday, October 16.

Zarvas was working a late night shift at the local Pizza Hut. She left Zipprian in charge of their child at home.
At about 8:30 pm, Zipprian took the child into the shower with him. But when Zipprian finished showering, he left the child in the shower, unattended, with the hot water streaming at full blast.

Zipprian proceeded to dry off and get dressed in the other room as the child began to cry.
It was only after this continued for five to seven minutes that Zipprian returned to the bathroom to check on his baby. By that point, the poor child had been burned by the water on his genitals, buttocks, and face.

Two burns on the child’s inner thighs has already begun blistering.
Rather than seek out professional medical help, Zipprian took the child to Pizza Hut to find Zarvas.

Zarvas’ response to seeing the burns was to clock out of work and return home with Zipprian and their child, where they claimed to examine the burns more closely.

At around 11 pm, Zarvas and Zipprian took their child with them to Walmart. As they went into the store to buy popcorn and cereal, as well as burn cream and gauze pads they believed they could use to treat their child, the 10-month-old was left alone in the car. His burns were still unattended.

It was only on early Monday morning that the couple finally decided to call for medical assistant.
The child had developed second-degree burns that had fully formed blisters all over the child’s groin and buttocks. The poor baby had to stay in Tampa Hospital’s burn unit for three days.

Zarvas and Zipprian have since been arrested and charged with “abuse of neglect.”