Home » Biker Gang Speeds To Neighborhood Searching For Bullied Kid, He Sees Them And Confronts Them 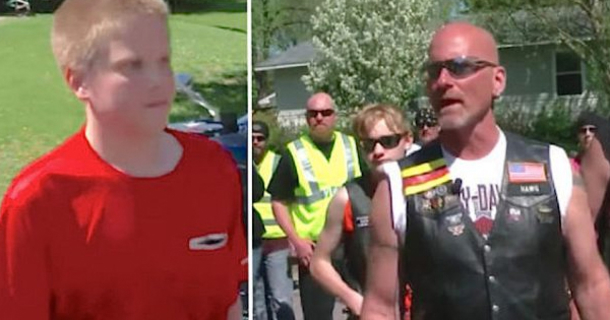 Biker Gang Speeds To Neighborhood Searching For Bullied Kid, He Sees Them And Confronts Them

One group of people who almost always seem to get stereotyped are bikers. Because they look tough and wear leather jackets and metal spikes, people have grown afraid of them. Just like pit bulls, bikers are not necessarily threatening people. More often than not, they are kind-hearted individuals who put out a gruff exterior when they face the world around them.

Like pit bulls, some bikers are aggressive. Some are part of gangs the commit violence. But the exception does not make the rule. In fact, many bikers are kind and open-hearted people once you get to know them.

In 2017, a Minnesota family learned the truth about a gang of bikers after they stormed into a residential neighborhood atop their hogs.
Tracy had reported that her son, who was in middle school, had become a victim of bullying. His classmates and peers had started name-calling and verbally abusing him. But soon their acts of aggression escalated and the bullies started physical assaulting Tracy’s son Zane.

The boy had been punched and pushed around. The bullies also wrote slurs and profanity on Zane with permanent markers, further shaming him in school.
The bullying became nightmarish that Tracy had no one to turn to. In a last-ditch effort, she reached out to random people online. She shared Zane’s story and prayed that someone would be able to do something to help the victimized boy.

Suddenly, a group of leather-clad, tough-looking bikers rode onto Zane’s street in Minnesota. There were a lot of bikers, all looking rather viscous. Because he had been the victim of so much abuse from bullies, Zane was worried. He hid inside his home until the gang pulled on in front of his house and called for him to come out.

He obeyed. Zane opened the door and stepped onto the front porch. He looked at the male and female bikers. And he decided, at that moment, that he was not going to be afraid anymore. He decided to face them.

Zane learned that the bikers were members of “Syd’s Angels Bikers Against Bullies.” And they were not there to add to his victimization but to fight back against his tormentors and protect him.

The group leader and founder Greg Carson presented Zane with a t-shirt and a promise that he would always have someone if the bullying got worse. And then the group prayed with Zane.

After the prayer session, Zane hopped on one of the bikes and rode through town, showing everyone that Zane had protection now.
His bullies got the message.

The biker group started after a 15-year-old named Sydney was bullied.
Carson said, “We wanted to help.”

And ever since they have been protecting children like Syd and Zane.

“Today is just the beginning, “Garson told Zane. “We love you. We don’t even know you, but we love you.”

When Tracy, Zane’s mom, heard the bikers, she could not help but tear up. She was glad her son had support.
What do you think about this group of bikers against bullies?