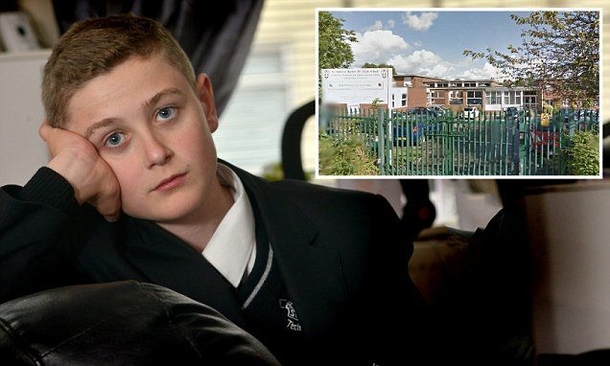 A boy was reportedly given an in-school suspension after administrators deemed his hair too short. According to reports, 13-year-old Jack Littlewood was placed in “isolation” because, as school officials said, his hair was shorter than it was supposed to be.

Littlewood’s mother Amanda Brown says she was outraged to learn that her son was taken out of classes for the day over the length of his hair, claiming that her son’s hair is thick and that it was cut a little shorter than usual so that it would be more manageable.

Officials at St Ambrose Barlow RC High School in England noticed that his hair was shorter and placed him in a classroom for misbehaving children for the entire day. He was initially told he would have to spend two days in “isolation” for his hair cut, but when he came in the next day, administrators said his hair was more acceptable.

Now, Brown has penned a letter to the school, telling them that she is disappointed in their decision to discipline her son.
“It is disgusting he is not getting the education he is entitled to whilst in isolation and I will be taking this matter further should you inflict this punishment on him another day,” Brown wrote in her letter. “I can understand if he had a skinhead, tramlines or had it coloured [sic] but his haircut is just a normal short back and sides.”

Reports say that the school doesn’t allow boys to have haircuts shorter than a number three cut, but Littlewood came to school on the day in question sporting a number two.

“Parents are aware of the school rules before pupils start in September,” head teacher Marie Garside said in her only comment on the matter.