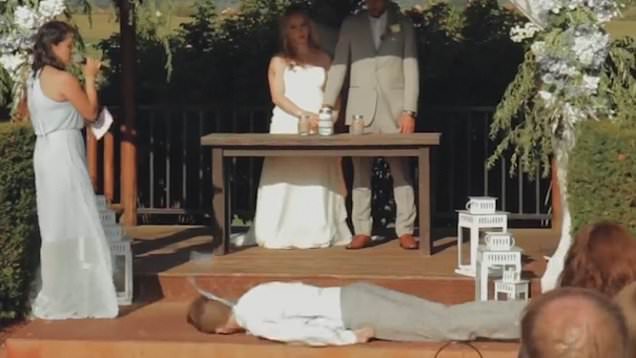 A wedding day is termed to be one of the happiest days in every couple’s life.

After all, you spend months planning for your fairytale event, making sure every little detail is seamlessly in place. But what happens when one of our wedding guests makes an entry so spectacular that it takes away the focus from your side as the bride?

Well, we’re not just giving you a hypothetical situation. Instead, we’re putting forward a real-life incident that left the world in awe.

In this particular story, a bride was left fuming after one of her guests made an entrance in his military uniform. And while he didn’t feel like there was anything wrong with that, that’s not quite how the bride felt at his presence.

Other guests couldn’t take their eyes off of the miltary man. And needless to say, he was the center of attention for obvious reasons. Upon noticing his attire and the attractive force that it was gathering from the crowd, the bride didn’t feel any shame in asking him to leave.

Yes, she reacted to the situation in the most shockingly rude manner imaginable and that revolved around asking him to exit from her event. How’s that for unbelievingly rude?

The story quickly went viral and soon we had the internet talking over the situation like a happening story. People couldn’t help but share their thoughts on the matter, adding how it was just plain and outrageous for her to do something like that.

But the bride defended herself but mentioning how the guest didn’t need to wear his Marine uniform, complete with all of his badges and medals too. She also added how it was as if he wanted people to admire his hard work in the field and a wedding just wasn’t the right place to do something like this.

“It was a black-tie event, he should have known better!”- the bride went on with her rants. However, no matter what her excuses were, the internet failed to take her side over her behavior towards a wedding guest.

Do you think the bride’s behavior was justified? Let us know in the comments section and don’t forget to share the article with others too!