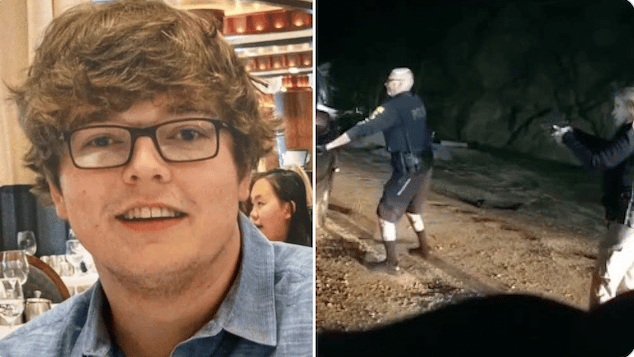 Christian Glass video: A Boulder, Colorado family have brought a wrongful death suit against Colorado authorities after the release of bodycam video showing responding officers shooting and killing their son after crashing his car and calling 911 for help.

Did Colorado deputies go too far in fatally shooting a seemingly disturbed man who had called 911 after crashing his car, who while refusing to respond to police officers demands to exit his vehicle upon seeing him holding a knife and technically according to his family’s lawyers not in the process of having commissioned a crime?

These are the questions and many more that a proposed grand jury will be asked to reflect on following the release of body cam video (see below) which captured the moment an armed 22-year-old Boulder, Colorado man was shot dead by police after he crashed his car and appeared to be having a paranoid breakdown.

Christian Glass, a citizen of the US, UK and New Zealand, called 911 for help after he crashed into a ditch in the small mountain town of Silver Plume late on June 10 — telling an emergency dispatcher he was ‘terrified.’

‘I’m stuck in a dangerous place and I will be killed,’ he told the dispatcher, saying he was convinced that ‘shadowy figures’ were following him according to KDVR.

‘I’m gonna have to kill some skin-walkers,’ Glass said, referring to the shapeshifting witches of Navajo legend.

WARNING: GRAPHIC ⚠️ Police officers in Colorado shot and killed a terrified young man whose car got stuck in a dirt road.

Christian Glass, 22, called 911 for help and showed signs of a mental health crisis before Clear Creek deputies escalated the situation and executed him. pic.twitter.com/Vo9pBFwwiZ

‘If I got out of the car I might be in danger … It’s so terrifying. I am so scared. I love you for being with me,’ he told the dispatcher.

Glass said he two weapons in the car to help defend himself against his supposed oppressors — while insisting he was ‘not dangerous.’

‘I have two knives, a hammer and a rubber mallet … But I am not dangerous, I will keep my hands completely visible,’ he told the dispatcher, offering to throw them out once officers arrived.

The dispatcher passed on that Glass ‘sounds very paranoid,’ and a Clear Creek County sheriff’s deputy who was one of the first to respond calmly asked him, ‘Do you need medical, brother?’

‘No, dude, we’re not gonna shoot you,’ one officer is heard telling Glass, who removed his keys from the ignition but said he was too terrified to get out of the SUV.

‘Sir, I’m terrified … I am so scared,’ Glass replies calmly through a crack in his driver’s window, offering to throw out his weapons and also follow the officers to their precinct to ensure his safety.

But as Glass holds his hands on the dash, one of the officers draws a gun after seeing a knife, barking, ‘Step out of the f—ing car now.’

70 minutes after Clear Creek County deputies arrived… he was dead.

Situation spirals out of control

The exchange appeared to escalate Glass’ paranoia, with him asking the officer, ‘Why are you scared of a knife if you are wanting to chat?’

Glass then holds his hands in a heart shape at the arrival of more officers.

Kids, you know where this is going….

During the standoff, a Colorado State Police sergeant stressed in radio messages that there was no reason to breach the car because no crimes had been committed and Glass did not appear ‘suicidal, homicidal or a great danger.’

However, five minutes later, officers moved to smash open his car door to remove Glass from the vehicle — prompting the 22-year-old to pick up one of the knives.

Authorities finally break the window around 15 minutes later — immediately screaming orders at him to ‘drop the knife.’

Listening to Simon and Sally glass, parents of Christian Glass who was killed by Clear Creek deputies in June. Covering for @ColoradoNewsCCM pic.twitter.com/yi0grcDFog

‘I have a hole in my heart, and it will be there until the day I die,’

Glass repeatedly screams in terror, his head swinging around to look at the officers surrounding his vehicle.

He continues screaming in terror as officers fire beanbags at him — with one of the officers calling out, ‘Someone tase his ass!’

One of the officers then unloads a multitude of shots as Glass holds the knife up as another officer approaches his window.

An autopsy showed that Glass ‘died as the result of multiple gunshot wounds,’ including five in his torso. ‘The manner of death, in my opinion, is homicide,’ the pathologist wrote.

Glass’ mother, Sally Glass, who is now demanding police accountability said her son was ‘petrified’ and ‘paralyzed’ by fear on the evening he was gunned down.

‘I have a hole in my heart, and it will be there until the day I die,’ she said.

The incident in Silver Plume received relatively little coverage in the days that followed. But that changed on September 13, when Glass’s parents, Simon and Sally Glass, appeared alongside attorneys from Denver-based Rathod Mohamedbhai LLC to announce their intention to file a wrongful-death lawsuit and demand prosecution of the many officers involved; officials from the Clear Creek County Sheriff’s Office, Idaho Springs Police Department, Georgetown Police Department, Colorado State Patrol and Colorado Division of Gaming had responded to the call.

The family’s attorney, Siddhartha Rathod said that Glass was clearly in a crisis.

‘Christian was experiencing a crisis, and he called 911 for help,’ said Rathod according to the nypost, ‘and yet these officers busted out Christian’s window, shot him six times with beanbag rounds, tased him multiple times from two Tasers, and then shot him five times.’

He was ‘fully contained in his vehicle and presenting no threat,’ the family lawyer stated, adding that Glass ‘had committed no crime, posed no threat to himself or others, and there was no reason for continued contact.’

‘These officers took a gentle, peaceful soul and extinguished it simply because it was ‘time to move the night on,” the law firm said.

The autopsy said Glass had THC, the main psychoactive compound in marijuana, in his system, and a .01% blood alcohol concentration. He also had amphetamine, which Rathod said is likely from an ADHD prescription.

Still, psychologist Dr. Max Wachtel told 9News that ‘it sounded to me like a delusional disorder or a delusion that’s part of a psychotic disorder.’

‘That is not the way to handle it, whether it’s drugs or it’s something organic, like a schizophrenia or a delusional disorder — coming at the person hard and aggressively, that is only going to make the situation worse,’ Wachtel said.

‘Industry best practices in law enforcement, we recommend that officers just leave the scene. Walk away from this scenario,’ said Wachtel.

Ed Obayashi, a sheriff’s deputy who is the lead trainer for use of force in California, also told the outlet that officers are taught to ‘walk away from this [type of] scenario.’

‘Once they decided to force entry — break a window — it was predictable that this event could most likely unfold the way it did,’ he said. ‘We’ve seen it time and time again.’

Leading use-of-force expert Seth Stoughton questioned why the officers did not take Glass up on his offer — made in his initial 911 call as well as during the confrontation — to throw out the weapons.

Will cops be indicted?

‘Officers have plenty of opportunity to maneuver themselves and put themselves in a position that’s not risky,’ said the former cop, who also saw nothing that should have made the officers smash the window.

‘It’s not clear to me that it should have gone that far,’ he said.

Heidi McCollum, district attorney for the Fifth Judicial District that includes Clear Creek County, released a statement Tuesday saying her office is investigating the case along with the Colorado Bureau of Investigation.

Her office plans to eventually issue a report on the shooting or present the case to a grand jury, which would decide if indictments should be issued, McCollum said.