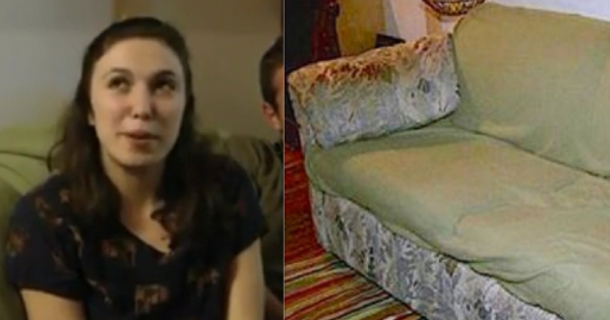 You’re a college kid, needing some secondhand furniture for the apartment you share with two roommates. The Salvation Army has a worn couch with a rank smell for sale, but it’s only 20 bucks, perfect for your poor-kid budget.

While relaxing on the couch with your roommates, everyone agrees the couch is pretty uncomfortable. You decide to investigate the lumpy cushions and make a startling discovery that leaves you in a moral quandary.

Reese Werkhoven, Cally Guasti and Lara Russo, college students, were screaming with excitement as they discovered a whopping $41,000 stuffed in various envelopes inside the old couch. To say they totally freaked out is an understatement.

“It had these bubble wrap envelopes, just like two or three of them,” Werkhoven said in an interview. “We ripped them out and [I] was just like freaking out, like an inch and a half of $100 bills.”

“The most money I’d ever found in a couch was like 50 cents,” he added. “Honestly, I’d be ecstatic to find just $5 in a couch.”
Then, the students made another startling discovery: a bank statement with the name of a woman who the money presumably belonged to. The trio was now faced with a moral dilemma.

“We had a lot of moral discussions about the money,” Russo recalled. “We all agreed that we had to bring the money back to whoever it belonged to. It’s their money — we didn’t earn it. However, there were a lot of gray areas we had to consider.”

The students tracked down the rightful owner of the money, a 91-year-old woman who hid her life savings inside the couch, because she didn’t trust banks. The woman slept on the couch after a hip surgery, and her daughter, trying to be helpful, sold the couch and bought her mom a new bed.

“She said, ‘I have a lot of money in that couch and I really need it,’” Guasti recalled. There was no question about it, the friends knew they had to return the fortune.

Upon arriving in the woman’s run-down neighborhood, the students felt they had made the right decision. They were greeted at the door by the smiling faces of the woman’s daughter and granddaughter.

The woman cried, overwhelmed with emotion that her life savings had found its way home. She gave $1,000 to the students as a thank-you.
“This was her life savings and she actually said something really beautiful, like ‘This is my husband looking down on me and this was supposed to happen,’” Guasti said.

“At the end of the day, it wasn’t ours,” Guasti stated, satisfied with the outcome. “I think if any of us had used it, it would have felt really wrong.”