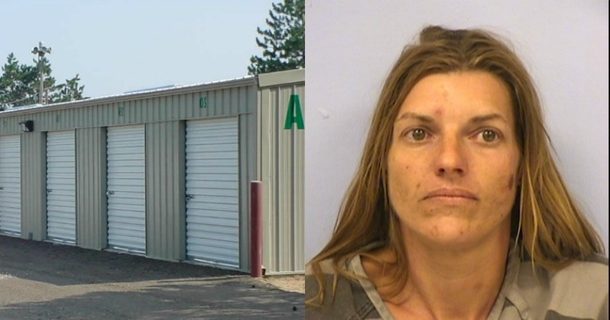 Pflugerville police were called to a storage unit after a concerned worker was worried about what they saw outside the locker. After busting off the suspicious lock, cops were smacked with a sight they weren’t prepared to find inside.

Now, one woman is in jail after she was found responsible for the unfortunate discovery.

Abandoned storage lockers are always shrouded in mystery, since you never know what hidden treasures you might find stored inside and forgotten about.

However, what Austin-area investigators came across wasn’t exactly what they hoped for. Although they came prepared for the worst based on the call they received, they didn’t expect to walk in on what they did.

According to KEYE, an overwhelming stench of urine and filth was coming from one man who was seen lingering outside the unit. Perhaps what was in the unit was even too much for this scumbag who cared more about himself than the child locked up inside.

Police found a 7-year-old boy with 36-year-old Carissa Esther Chancey laying on the ground in the hot locker surrounded by drugs, paraphernalia, and feces.

Along with the strong stench of urine, investigators were sickened by the overwhelming ammonia fumes coming from the 3-foot by 12-foot storage unit.

Multiple rats were inhabiting the small space with them, milling around a bag containing marijuana and two improvised marijuana pipes found near the woman and child. Syringes with methamphetamine littered the concrete ground and were within the child’s reach, along with a loaded AR-15 rifle.

With no ventilation, the stench was only compounded by the Texas heat, making the locker about 90 degrees inside by the time cops arrived. The man who was the original reason for the call was gone when investigators got there, but the boy and Chancey were still in the same place they had been since the day before. The child hadn’t eaten in almost 24 hours and was found to have a foot injury when examined by EMS.

Chancey was arrested and charged with abandoning or endangering a child and possession of a controlled substance, but there is no word on her male counterpart.

The boy is receiving medical care and is in the state’s custody. After rescuing the child, police should have left the woman in this storage and locked it up from the outside, allowing the punishment for what she did to her child in that unit to sort itself out.