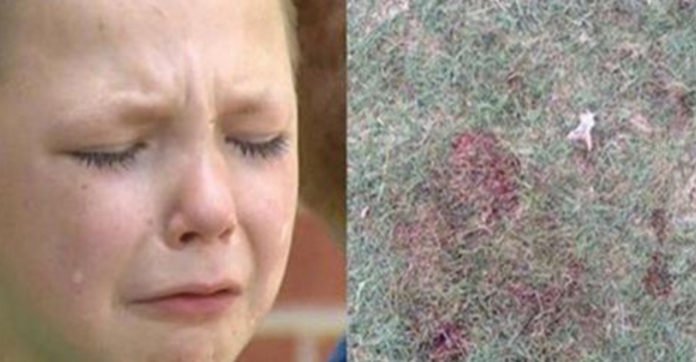 Eli Malone was having a birthday party. He was turning five.

The children at the party had just gone inside the house to have cake when they all heard a loud bang.

They looked outside to see the family dog, Opie lying on the ground bleeding.

Opie had been shot by an Oklahoma, police officer. Eli’s parents ran outside and found Opie, a three-year-old pit bull mix gasping for air.

No one had called the police – why had the officer been there? Was the dog acting vicious? What prompted the shooting?

According to reports, Officer Josh Franklin from the Wynnewood Police Department shot Opie with a high-powered rifle.

The officer didn’t say a word but lifted the rifle again and shot Opie one more time.

All this while the children were watching through the window.

After the second shot, Franklin got in his car and drove off. Later, the officer claimed the dog was trying to attack him through the fence.

Okay, so was the fence going to collapse?

A dog behind a fence is not dangerous unless you hop the fence or the fence is going to fall over.

Moore just took the word of his officer.

The Wynnewood Police Department should be ashamed. There was no reason to shoot Opie twice with a high-powered rifle.

This could have been avoided – not glossed over with a ‘justified shooting’ claim.