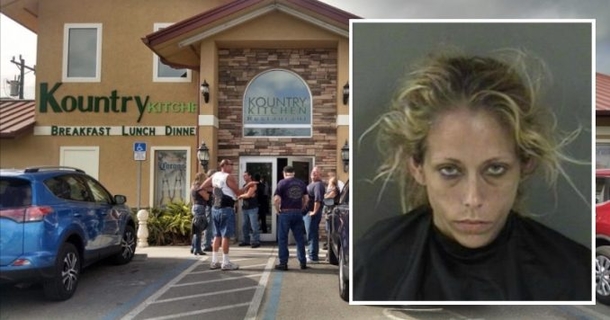 A mother from Florida was in a restaurant parking lot with her 2-year-old son when she approached two strangers who were exiting the restaurant. However, these strangers weren’t prepared for what she did next that left her son crying while she uttered four sick words.

The strange incident occurred at the Kountry Kitchen restaurant when Amber Warner was seen entering the building with her 2-year-old son. Only a few moments later, she was back in the parking lot and approaching two complete strangers for a “favor.” Unfortunately, when the visibly frantic mom opened her mouth, the strangers were left stunned to hear her utter four sickening words.

To the couple’s horror, Amber had simply placed her son on the ground in front of them and said, “I can’t do it.” Unfortunately, things escalated rather quickly for the duo, as she then walked away and got into a black truck and drove off, abandoning her toddler son.

To the couple’s horror, Amber had simply placed her son on the ground in front of them and said, “I can’t do it.” Unfortunately, things escalated rather quickly for the duo, as she then walked away and got into a black truck and drove off, abandoning her toddler son.

Of course, the couple immediately contacted the Vero Beach Police Department about what had happened.

In fact, because of the mother’s frantic nature and careless behavior, they were able to track her down quickly. After interviewing her on what had happened, she was placed under arrest. According to Inside Edition, she “was charged with unlawful desertion of a child and later with resisting arrest without violence for an incident with her arresting officer during transport.”

Luckily, Amber’s son wasn’t physically harmed during the incident. Although he appeared to be in relatively good health, there’s no doubt that his mother wasn’t able to give him the love and support a child needs. According to the Vera Beach Police Department’s Facebook post, he has since been released to the custody of Department of Children and Families. 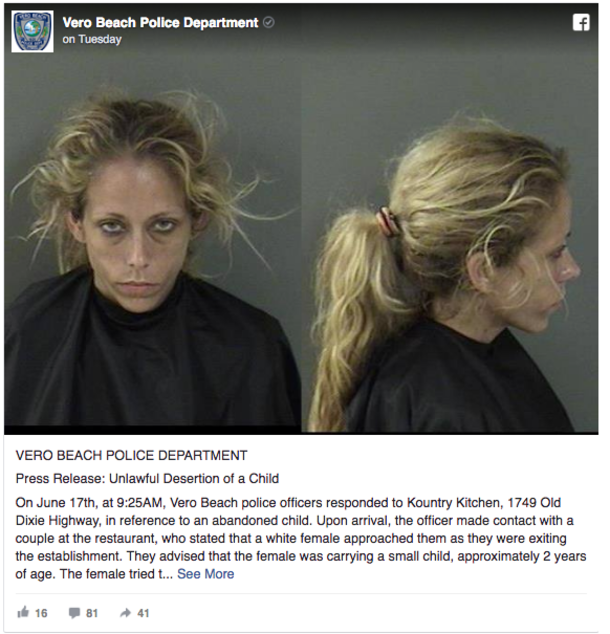 There is no excuse for this mother’s behavior. It doesn’t matter how stressed you are or overwhelmed you may be feeling, when you become a parent, you don’t ever consider abandoning your child or leaving them with a complete stranger. In fact, you should love them so much that all you care about is their safety and well-being.

Unfortunately, not every parent seems to be equipped with this instinct. There must have been a few screws loose for this woman, considering she thought that leaving her child with random strangers was a good idea. Obviously, there were many other options for her to consider, including leaving her child with family or a friend. Parenting isn’t easy and there are moments you are completely overwhelmed, so no one should be afraid to ask for help – but not from strangers at a restaurant as you drive away. This should be common sense, but in today’s society, that seems rare.