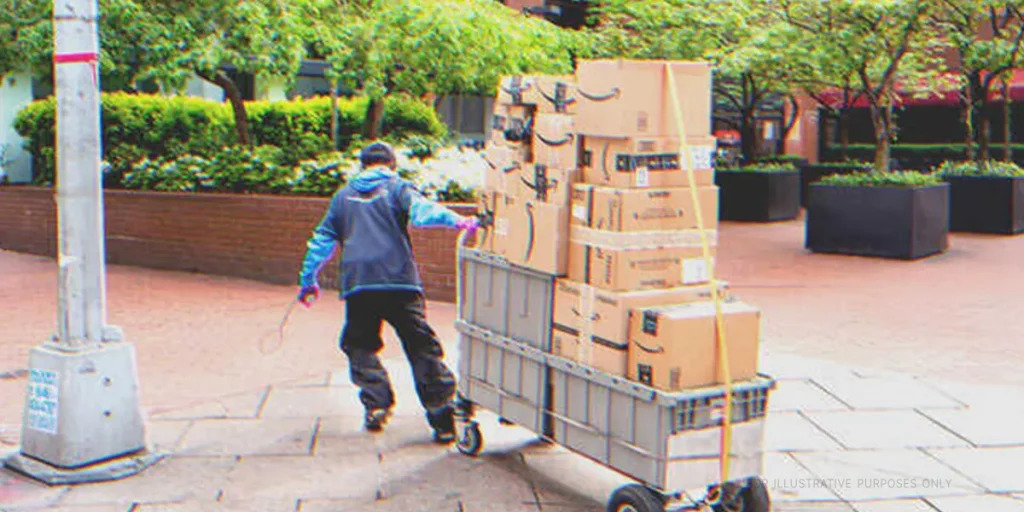 A woman received a special message from her regular deliveryman on her doorbell camera and decided to do something special in return. He didn’t imagine what would happen next.

Iris was busy reading a book when her phone notified her that someone was at the door. This wasn’t odd. It happened all the time because Iris was a homebody and hated having to go out. She got her groceries and everything she needed online and loved her little loner life where she didn’t interact with anyone.

But still, she pulled up the footage and saw the same man who always delivered her groceries. This time she was excited to receive her things because tomorrow was Thanksgiving, and she had ordered a bunch of ingredients.

She expected him to leave the things at the front door like always, but the man suddenly waved at the camera, and Iris decided to listen to what he had to say. “Hello, there! It’s me, your regular deliveryman! Since Thanksgiving is tomorrow, I wanted to thank you because you order often, though I’ve never seen you,” the man started.

“It’s nice to finally see the face of the person who changed my life.”
For some reason, Iris smiled, although she usually didn’t care what others did. She continued listening.

“I brought something special for you, and I hope you have a great holiday, and you keep ordering. If you ever feel lonely, feel free to come out to talk when you see me. Anyway, thank you again! Happy Thanksgiving!” the man finished.

He showed the camera several bags that seemed to contain things Iris had not ordered and placed them near the door with her actual deliveries.

Iris waited a few minutes for the man to leave then went to her door. Surprisingly, she saw a chocolate babka and a few tiny pumpkin pies, and suddenly, Iris wished she had rushed to her door to thank him personally.

Iris had no idea how to thank him because she had never interacted with him directly or knew his phone number. However, since he always worked this route and delivered all her things, other neighbors might know him.

Iris grabbed her phone again and messaged her neighborhood on the Nextdoor app, hoping to find out about him. She also sent them her doorbell camera video, after which someone identified him. His name was Sebastian.

Iris went to her computer to find the number of the company on the website where she bought all her deliveries. After talking to several people and connecting to others, she finally reached Sebastian’s boss, who had a burly, no-nonsense voice.

Iris told him how great Sebastian was, how quick he delivered what she ordered, and even told him about his special gesture. The boss was surprised by her call, as most people didn’t care, and told her he appreciated the feedback. Afterward, she uploaded the video on TikTok, which went viral in her local area in Austin.

A few days later, Sebastian was at her door ringing the bell. He wasn’t there to deliver anything though he was still in his work uniform.

Upon opening the door, Iris saw his bright smile, and although she didn’t like interacting with people, she felt comfortable now.

“It’s nice to finally see the face of the person who changed my life. My boss told me he received your call and…” he said with his boisterous voice, then took a moment to take a deep breath “…I’ve been promoted!”

“Congratulations,” Iris said in her quiet voice. “And thank you for the babka. It was delicious. And the pumpkin pies too.”

“I’m glad. My wife made them. I’m going home right now to tell her about the promotion. This new salary and benefits will do so much for our family. Thank you, ma’am. Hmm, will you tell me your name?”

“Well, I’m so grateful, Iris. The only problem is that I might not be your deliveryman anymore from now on, but I’ll make sure someone stays on top of things in this area,” Sebastian promised.

They talked for a few more minutes, and then he said goodbye. Iris hoped everything turned out well, not expecting to see him again.

But to her shock, Sebastian started coming after work at least twice a week. At first, they talked on her porch, where he updated her on his days. Then she invited him inside for coffee.

Eventually, he became the best part of her days, and she noticed how much she had missed being around people, having someone to talk to, and having a sense of companionship. In her old age, this new friendship was so rare, and when Sebastian invited her to meet his family, she was even more surprised at how happy it made her.

Sebastian told her she could come over anytime, too, as he didn’t live far away. Her loner days were over, and Iris didn’t have to spend any more holidays by herself.