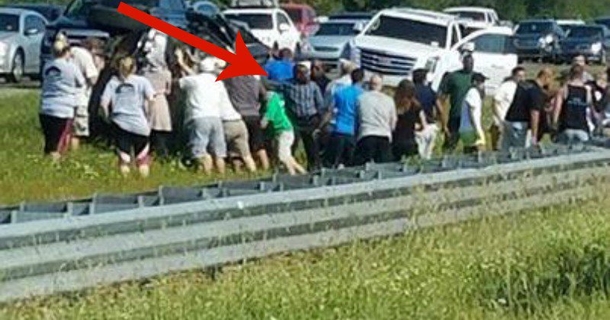 A motorist heading down I-75 in Florida pulled off the road when a car traveling in the opposite lane blew a back tire, causing the driver of that SUV to lose control and fly into the grassy median.

Other passersby began stopping, and as a crowd formed, the witness was shocked at what she saw hidden in the group and immediately snapped a photo.

An unnamed 31-year-old was driving a Ford Excursion northbound on the highway with at least two other passengers in tow when the tire popped and the vehicle flipped over the guardrail. The SUV was mangled and on its side, but the mother managed to get out.

She frantically told strangers in the crowd surrounding her car that her 9-year-old daughter was stuck inside when the onlooker noticed something else.

Dayna Gibson and her father David Lowe were on the scene and assisted the woman in getting out before going back to get one of her two children still stuck in the car.

The older of the two was rescued, but when they group of good Samaritans ran to the other side to get the youngest girl out, all they saw was her arm sticking out from under the vehicle, Gibson explained to Bay9News. That’s when the crowd of about 50 people did the unimaginable. 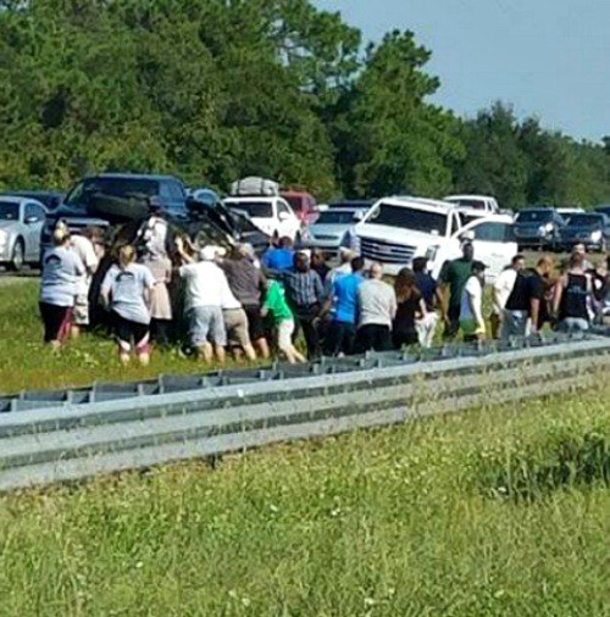 Photo of 50 people on the scene

Desperate to get the girl out alive, it was them against the huge SUV, which couldn’t be lifted by just a few people. Everyone came together in a heroic moment for a stranger, from all different walks of life, and accomplished the impossible task of moving the car off the girl.

“We achieved what would have been impossible by coming together,” Gibson said, proud that no matter everyone’s differences, they worked together to save this girl.

The witness watched the intense scene unfold and snapped a photo of the moving moment, realizing that this is a rarity in the divisive and hate-filled time we’re living in right now. Gibson had the same epiphany, saying, “I think if we could be reminded how powerful we are together, especially during these times, we could do a lot of great things.”

This isn’t just a picture of an incredible rescue, it’s a snapshot of the American spirit.