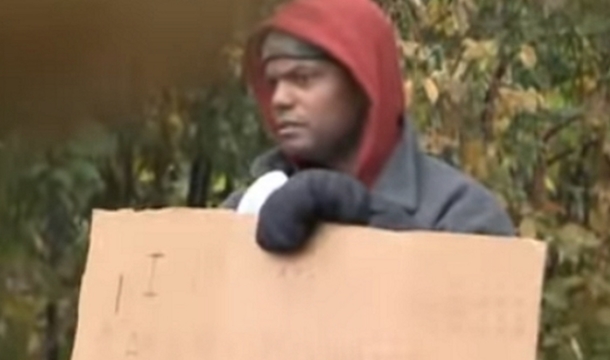 It is normal to see panhandlers on the streets of highways and busy intersections, asking for money and holding a cardboard sign that tells their story. Whether you hand over a few coins or bills, seeing these men and women in such a desperate situation is likely to get you to appreciate your own life and all you have.
When motorists in Bethesda, Maryland saw a panhandler holding a sign on the side of a road, some of them had already been on their phones. Little did they know, the sign that the panhandler was holding, would make them realize that they put their phones down a second too late. The panhandler was actually a disguised police officer, holding a cardboard sign that read…

“I am not homeless. I am a Montgomery County Police Officer looking for cell phone texting violations.”

The sting operation was the perfect opportunity for the undercover officer to notify other officers every time he saw a driver holding their phone at the stop light. It didn’t take long for the drivers to be pulled over by police officers and handed a violation. But, cell phone usage while driving wasn’t the only violation that the drivers were being charged with. Some were also slapped with tickets for illegal window tinting and not being in the turning lane at the right time.

The undercover operation ended up in netting quite a batch of lawbreakers. Overall, 31 tickets and nine warnings were given out to drivers using their handheld devices. While the majority of the drivers were not impressed with the undercover operation, one admitted that making a cell phone call while at a stop light was wrong.

In the video below you can see exactly how the drivers responded as they were getting pulled over.
Not all drivers were understanding and one even yelled at the officers while he was being filmed by the news crew.

“We got all kinds of responses from drivers,” said Officer Brian Nave, from the Montgomery County Police Department. “Anything from ‘I understand,’ to accusing the cops of holding traffic up.”
One driver shared that she wasn’t on her phone texting, she was looking at Waze, a traffic navigation app.
Naves clarified the law and shared that hands-free devices are not supposed to be in your hands while driving.

Cell phone use while driving has become a major issue, causing far too many accidents and deaths. In today’s society of immediacy, people feel the need to respond to others in a matter of seconds and no one wants to miss out on a text exchange or social media conversation, so they use driving time to catch up on these conversations.

But, is it all really worth it?
Some commenters were critical of the undercover operation…
“I wonder if the police will pay your repair work for getting into an accident reading his sign. Since he took your attention off the road.”

“Most people drive with one hand anyway, and a conversation is a conversation, I’d say talking on a phone is not dangerous because your eyes can stay on the road. I’d say talking with someone who is sitting in the car with you is more dangerous than the phone because occasionally you’ll make eye contact with them to be polite and take your eyes off the road. A real person is infinitely more distracting than a phone conversation. Texting is completely dangerous, however.”