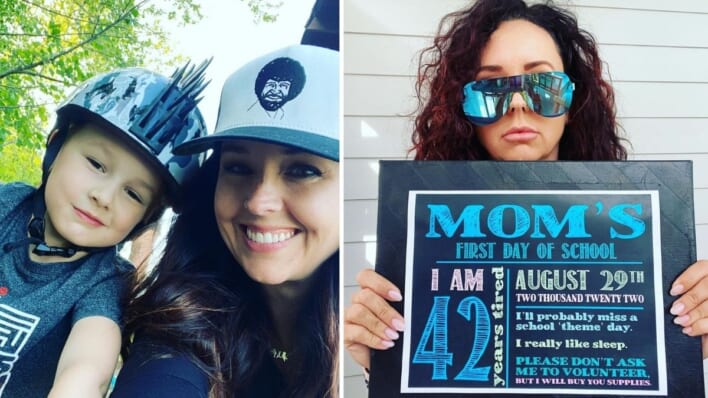 No parent is perfect, but North Carolina mom Jeni Bukolt took to Instagram to remind us how that that’s okay.

Many parents make back-to-school signs for their kids. These signs often include stats like how old the kid is, what grade they’re entering, and a few of their interests or maybe what they want to be when they grow up. Each year Facebook and Instagram brim with such photos during the first week of back to school.

This year, however, one mom decided to flip the switch. Jeni Bukolt of Waxhaw, North Carolina, made a “Mom’s first day of school” sign for herself. “I am 42 years tired,” it reads. Then, under the date, she added, “I’ll probably miss a school ‘theme’ day” and “I really like sleep.” The best part? Under that, she put, “Please don’t ask me to volunteer. But I will buy you supplies.”

Bukolt then snapped a photo of herself holding that sign while sporting oversized sunglasses and a tired look.

“Happy Back-to-School season to all the parents,” she wrote in her Instagram caption. “May we not forget a ‘theme’ day or accidentally send our kids to the bus stop on the teacher work days, or forget to pick them up on the randomly scheduled half days. May we have patience and give each other grace for doing our best!”

Many parents immediately related to Bukolt’s post because it shares the message that it’s okay not to be perfect. In a world where so many of the things we see on social media drive home the message of perfection, seeing the opposite of that is quite refreshing. So naturally, the image went viral.

“I make signs for my kids each year, but lately I’ve thought about how I always feel behind, as though I’m failing (in some way),” Bukolt told TODAY Parents. “My kids will come home and say, ‘It was Dr. Seuss Day,’ and that sinking feeling hits,” she continued. “Or, I’ve accidentally sent my kid to the bus stop on a teacher (training) day.”

This year, however, Bukolt wanted to embrace the hectic nature of back-to-school while helping other moms who are in the same boat.

“Parents put so much pressure on themselves to live up to a certain standard on social media,” she explained to the publication. “No one has a perfect life, and we don’t have to judge each other.”

While some trolls took Bukolt to task online, she revealed that overall she heard from many moms who saw her sign and were grateful for it. She recalled moms who said they were stressed out, but the sign made them laugh, or the moms who said it made their day. After all, doesn’t everyone want to feel seen?

For those wondering, Bukolt’s kids are now 8 and 12. In addition to being a mother, she owns a communications and marketing company, Haven Creative Agency. So she definitely understands and lives those same pressures many parents face to do it all.

“We’re all feeling that way,” Bukolt added. “So why not lighten the mood a bit?”

As parents, it’s easy to compare ourselves to others — especially when so many of us use our downtime to feed our social media addictions and scroll to see how other moms and dads do it. But it’s important to remember that social media isn’t a mirror; it’s a smoke show. The messages are controlled, and no parent is perfect.

While not all of us have to open up on social media the way Bukolt did, talking about those imperfections and realities with friends and fellow parents is essential. And, as this story reminds us, it’s okay to feel like you’re sometimes drowning or as though there’s nothing left in your tank.

They say it takes a village, so rely on your support system for help. Take breaks when you need them. Throw some cake and pizza on the table at your kid’s next birthday party, and don’t feel the need to make it Pinterest-worthy. We all get tired sometimes, but putting your energy towards showing up and being there for your kids when it counts is what matters. Whether you capture it on social media or not.