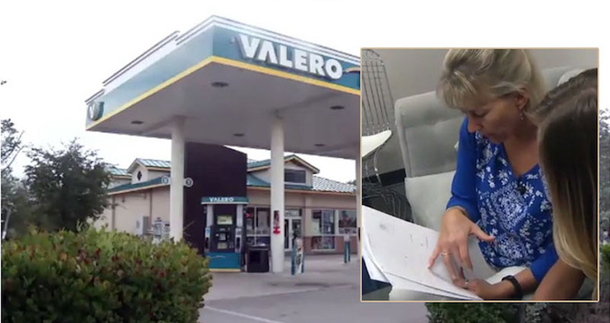 Family Charged $10,000 For Gas, Manager’s Response Made Things Even Worse

A Florida family was in disbelief when they tried to use their credit card but were told they’d exceeded their limit. Their shock only intensified when they checked their account and saw a nearly $10,000 charge for what should have been a $20 tank of gas.

However, things would only continue to go from bad to worse when they asked the gas station manager to fix the error and got a response they never expected.

When Susan Gower’s husband stopped at a Valero gas station in Fort Myers on May 5 to fill up his tank and used his credit card to pay for the transaction, he had no idea that simple decision would turn into weeks of headache for his family.

When Susan tried to use their card the next day, it was declined so she immediately checked their account and found a $9,949.36 charge from the gas station the previous day.

“It was just shocking,” she said, according to Fox59. Unfortunately, her shock was about to get much worse. She looked at her receipt from Valero and realized the pump charged them for more than 27,000 gallons of gas so she headed to the bank and canceled her card. Luckily, the bank said it should be an easy fix. Susan recalled, “The bank just said, ‘Get with Valero, have them reverse the charges.’ Very simple.” Unfortunately, she’d soon find out that wouldn’t be the case for one aggravating reason.

When she told the manager, who also happened to be the store owner, what had happened and asked for the charge to be reversed, the owner had two infuriating words for her. He told her that it “wasn’t possible,” which anyone knows is a lie. Instead of having the issue fixed that day, Susan was forced to get Valero customer service involved. Her account was eventually credited back the money two weeks later, but during that time, additional expenses and frustrations mounted.

She couldn’t use her Visa points to rent two cars and had to pay out of pocket for the expense since her card was frozen, she explained, according to Fox59. Rightfully, she was hoping the company would pay her back for the trouble since the problem, which originally stemmed from a glitch at that store’s gas pump, was made worse by the owner’s refusal to do his job. “He just wouldn’t ever own up to the fact that he was wrong,” Susan explained, and because of that, her family was repeatedly inconvenienced.

“I’m a teacher, and 10-year-olds know they need to own up to their mistakes and try to make it right and apologize. That’s what makes me mad,” Susan added, making a valid point that everyone can learn from. While the glitch at the pump might have been out of the owner’s control, he had a responsibility to correct it. To say it “wasn’t possible” to fix an overcharge of nearly $10,000 is unacceptable. It needed to be fixed, and he knew it. If he didn’t know how, he should have said so and called for help himself, not left this family to fix an error that originated at his store.