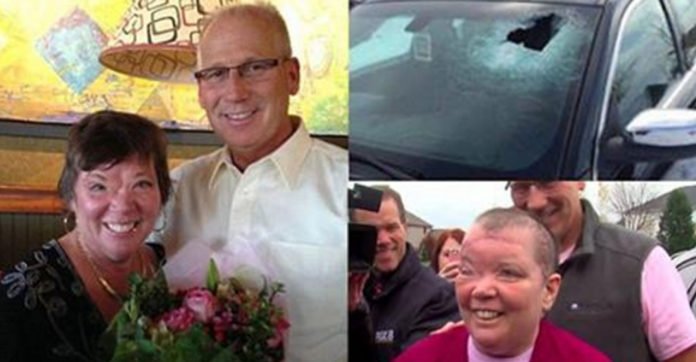 Sharon Budd, a middle school teacher, was the victim of a terrible prank.

She was sitting in the passenger seat of a car when a rock slammed through the windshield.

Some teenagers, standing on an overpass had dropped the rock onto the car.

The heartless teens actually cheered as the rock did its damage.

Sharon lost an eye and suffered a traumatic brain injury.

It robbed her of her independence, and she could no longer work.

Randy Budd, her husband, was hit hard by the incident.

He was having trouble handling the increasing stress.

Bills were mounting, and there was no end in sight.

Tragically, Randy sent one last text to family and friends before committing suicide.

A District Attorney has claimed that Randy didn’t commit suicide – his death was the result of the actions of those teenagers who dropped the rock.

They were responsible for his death.

They were also responsible for what happened to Sharon and the entire Budd family.

Sharon has struggled to deal with the loss of her husband.

Her injuries make it difficult for her to process, she told her sister-in-law, Rhonda Williams, that she doesn’t know how to cry.

Brett Lahr was the oldest and got a prison sentence of 18 months to 20 years.

The other boys were given jail sentences of varying lengths.

That doesn’t seem quite fair at all – does it?

Take a listen to this chilling 911 call.