Home » Fishermen On This Boat Spotted What They Thought Was a Seal But They Approached It and Got a Closer Look! 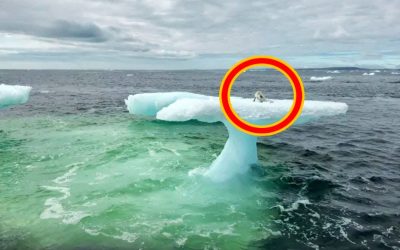 Fishermen On This Boat Spotted What They Thought Was a Seal But They Approached It and Got a Closer Look!

When a group of crab fishermen set out in their boat one summer day, they never could have imagined what they’d end up catching.  It all started early on a June morning when the crew, Mallory Harrigan, Cliff Russell, and Alan Russell, were cruising off the coast of Labrador, Canada.  Due to an unusually large amount of sea ice, they’d been unable to set out any earlier and were running a little later than expected. Despite the delay, it was business as usual and they busied themselves setting up all the fishing gear for the day ahead.

They had set a course for a small town on the coast of Newfoundland and Labrador called Pincent’s Arm where they planned to fuel up their boat, The Northern Swan.  It was while they were enroute to their destination that they spotted something strange up ahead on a mushroom shaped piece of ice that was floating in the middle of the ocean.

Being four miles out from the nearest shore, they assumed it must be a seal at first.  However, they noticed that a bunch of seagulls were circling the animal and if it was a seal it would have slipped back into the water to avoid the pesky birds.  They motored closer to get a better look and soon realized that they were actually looking at an arctic fox that had become stranded on the small piece of ice! He must have been looking for food when the ice broke apart and ended up floating out to sea before he could get back to land.

Knowing that it faced certain death if they didn’t get it off the melting iceberg, the crew decided to rescue the poor fox.  Naturally they hesitated, being that the fox was essentially a cornered wild animal, it could potentially lash out at them. Even so, they decided to take the risk because they were his only hope for survival.

They first tried coaxing the fox onto the boat, but he was too timid and afraid to even get close to them.  They soon realized that the only way to get him was to break the ice he was on so that he’d fall in the water and from there they could scoop him out with their dipnet.  After they broke the ice, the fox tried to swim away but he was already exhausted and weak from not eating or sleeping, so the crew didn’t have to wait long before they were able to scoop him up and onto the boat.

As soon as the fox was safely on board he scurried over to a corner and curled up into a ball.  The fishermen tried to feed him some crackers they had, but the fox wasn’t interested. Shortly afterwards they’d reached Pincent’s Arm where they set about making a bed for the fox out of sawdust and fish pans.  Their goal was to get him warmed up and dry, and once the fox settled into his new bed, he fell asleep right away.

While the fox slept the group went about their business before heading home to William’s Harbor.  Hours passed before the fox finally woke up and when he did, he was thirsty and hungry. He was also relatively tame; he must have sensed the people were only trying to help him.

After he ate a tin of Vienna sausages he perked right up.  The fishermen monitored him and once they decided that he could go off and survive in the wild they released him.  His new home was on a small island in the harbor which had been used to house sled dogs in the past. There were old dog homes he could use for shelter and plenty of small animals and birds for him to hunt.  After they re-homed the fox, they said he ran off to explore and that they still see him every now and then chasing after his dinner!