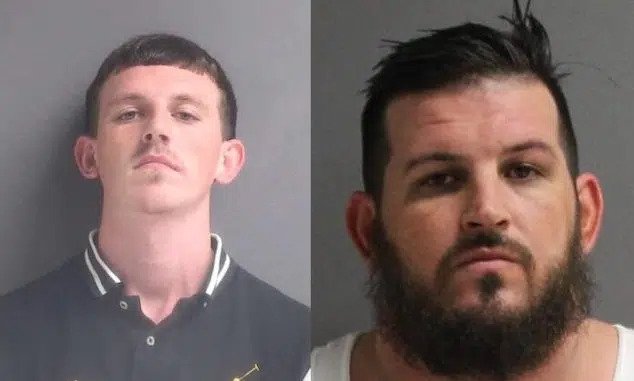 A Florida father and son accused of ‘brutally’ beating a man unconscious at a wedding reception last week have been arrested.

Joel O’Grady, 38, and Julian Falkinburg, 21, both of Sanford, were wanted on charges of aggravated battery for reportedly beating up a male guest during a fight at the Granville Farms wedding venue in Lake Helen on Saturday, Sept. 3.

Tyler Kaltenbach was left so bloodied, after father and son stomping on the 36 year old man, that the victim will now require significant facial reconstructive surgery.

Upon their arrest on September 7, father and son were booked into the Volusia County Branch Jail. O’Grady posted $100,000 bond and was released overnight, while Falkinburg posted $50,000 bond and was released Saturday afternoon, the sheriff’s office said in a statement. Conditions of their release require them to have no contact with Kaltenbach, Click Orlando reported.

Leading up to their arrest, Volusia County authorities warned of O’Grady and Falkinburg having an extensive criminal history.

‘This could have easily been a murder,’

According to a 911 call, Kaltenbach was found clinging to life on the ground.

Both father and son are accused of severely beating the victim, even after they became unconscious. The beating ensued following a verbal altercation at the parking lot at the wedding reception grounds.

‘This could have easily been a murder,’ Volusia County Sheriff Mike Chitwood said. ‘Somebody could have ended up with significant brain damage. We hear about these things all the time.’

O’Grady and Falkinburg fled the scene before deputies arrived, before their eventual arrest this weekend. The victim was taken to the hospital for treatment where he remains in serious condition.

Kaltenbach has a long road to recovery and will have to undergo face reconstructive surgery, Sara Howeller, his family’s attorney, said according to FOX35 Orlando

‘Dental work is going to be extensive. All of his upper teeth were kicked out. Many of his lower teeth,’ she said.