Home » Florida Man Furious Over ‘Permission Slip’ Found In Niece’s Backpack. What Do You Think About This? 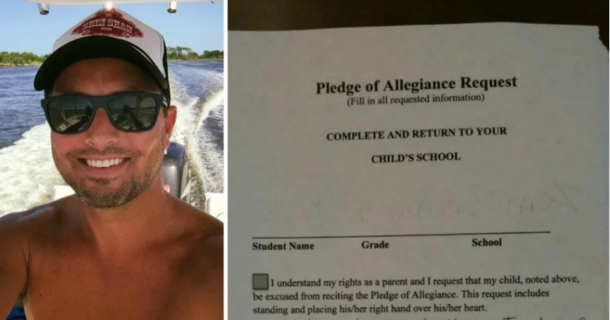 Florida Man Furious Over ‘Permission Slip’ Found In Niece’s Backpack. What Do You Think About This?

The form, which is a permission slip of sorts, requests that parents fill in the name of their child, their grade, and the school within the district that they attend. It goes on to say:

“I understand my rights as a parent and I request that my child, noted above, be excused from reciting the Pledge of Allegiance. This request includes standing and placing his/her hand over his/her heart.”

The form ends by asking for a signature from the student’s parent or guardian and the date. Ironically, an image of the American flag is on the bottom of the permission slip. 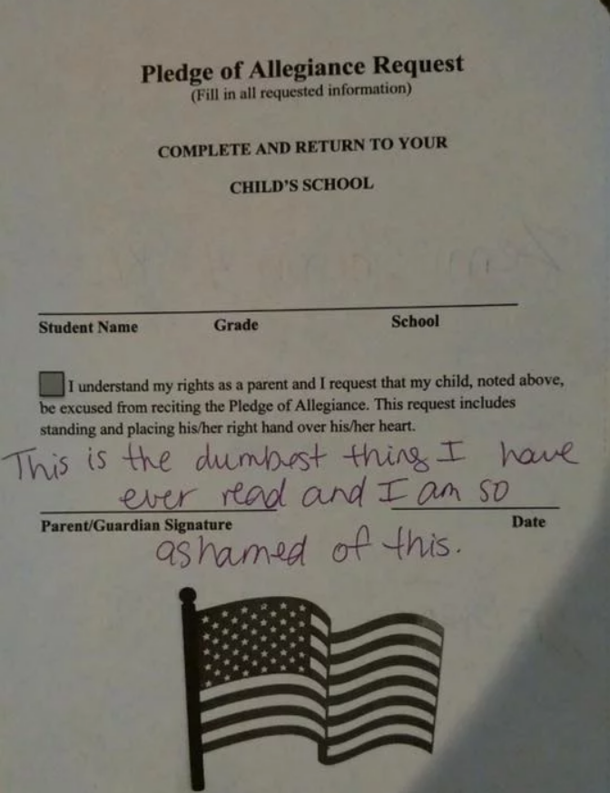 Brienen shared the above photo of his niece’s “Pledge of Allegiance Request” form from Killearn Lakes Elementary School, which is part of the Leon County School District in Florida. (Photo Credit: Micah Breinen/Facebook)
On the photo shared by Brienen, a response has been written in by either himself or his niece’s mother: “This is the dumbest thing I have ever read and I am so ashamed of this.”This “Pledge of Allegiance Request” form being handed out in schools is indicative of a major shift in the values being taught in our public education system over time. Not so long ago, no one even questioned whether students should stand respectfully with their hands over their hearts and recite the Pledge of Allegiance at the start of the school day. That was as essential a part of the learning experience as math or science.What are your thoughts about this?  Do you agree or disagree with this new policy?