Home » Furious Mom Slams American Airlines For Losing Her Daughter,12, After Paying $150 For Chaperone To Take Her Through Miami Airport 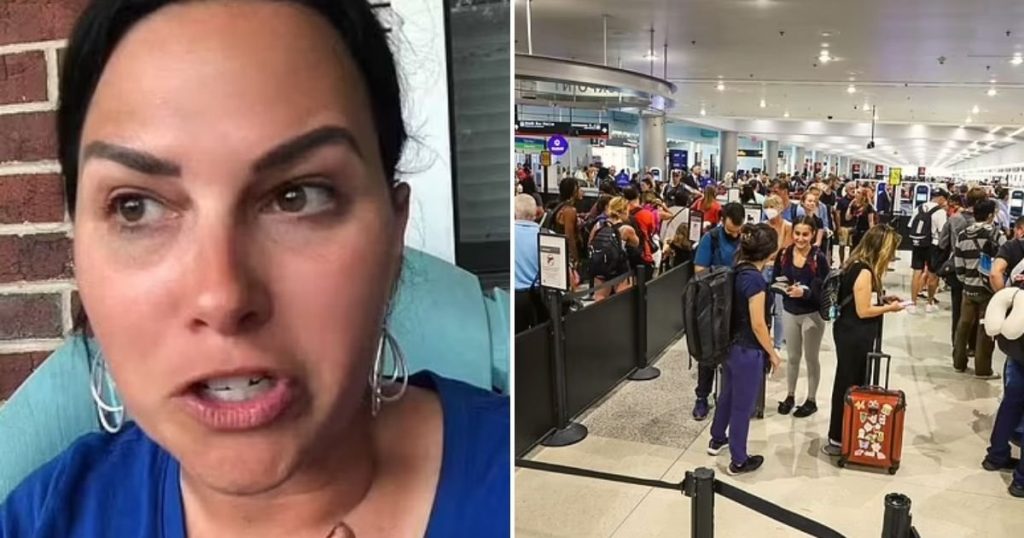 Furious Mom Slams American Airlines For Losing Her Daughter,12, After Paying $150 For Chaperone To Take Her Through Miami Airport

American Airlines has come under fire from a Georgia mother for the loss of her 12-year-old daughter during a solo flight from Tennessee to Miami.

After Kimber was not escorted from the plane and vanished, 39-year-old photography professor Monica Gilliam lambasted the airline.

Last week, the young girl had taken a solo flight from Chattanooga to Miami to visit her father for a three-week visit.

Her mother had paid an additional $150 for her to be escorted through both airports and wear a badge alerting the crew that she was traveling alone.

But as she stepped off the plane, they just grinned and waved at her and let her wander the terminal until her father eventually found her.

It happened in the midst of widespread pandemonium at US airports, when thousands of flights over the Fourth of July holiday were delayed and hundreds were canceled.

Nearly 50 million people traveled to visit loved ones over the weekend, making it the largest travel period since the pandemic started.

This week, there was more mayhem as 245 flights were delayed and roughly 100 flights into, out of, and throughout the country were canceled.

In the meantime, the Biden administration planned to spend $1 billion a year for the following five years to upgrade 85 airports across the US.

The $5 billion will be used on a number of construction projects, including airport terminals, security checkpoints, and spaces for baggage inspection and screening.

“It’s not OK and it shouldn’t happen,” stated Gilliam. I got a call from American Airlines almost an hour after her flight touched down.

“Your child is missing, we’ve closed the terminal, and we don’t know where she is,” the American Airlines manager in Miami said.

The toddler was waved off the plane by the flight attendants rather than being escorted because the child’s flight had landed early, according to Gilliam.

It turned out that the flight attendants waved her off the plane and said, “Bye,” and she was unsure of what to do, so she kept walking because they were waving her off.

The sight of the toddler ambling through the terminal sent Gilliam reeling.

She claimed on TikTok that the woman was an unaccompanied minor in one of the nation’s busiest centers for human trafficking as she passed through the airport.

The youngster was able to contact her father, who helped her navigate the airport until they met up without additional incident.

“On the way out, no American Airlines employees asked her if she had an adult, no Miami airport staff asked her, and even the TSA security agent stopped her before she left the secure section into baggage claim.”

In addition to the ticket price, using the system costs $150 each way, and there is an additional fee for flying with siblings.

It features, according to its website, “Early boarding to give extra time to settle in and meet the flight attendants.

“Kids-only lounges for flight connections in our hub cities” Free Quaker Kids’ Kits with refreshments and activities (for children aged 5 to 10) are available in key cities.

“An airport escort to assist your child in getting to the gate for subsequent flights” accompanying the youngster to the designated adult who will pick them up when they arrive.

Remember that our flight attendants will be occupied with tasks on board and won’t be able to continuously watch over your child during the journey.

Let your youngster know to press the call button if they need anything, it continues.

Around the past week, a flurry of cancellations and delays that affected travelers all over the US have caused havoc.

Over the weekend, around 48 million people traveled, with 3.5 million flying, according to AAA.

However, considering that professionals examined more than 2.4 million people at airports on Thursday alone, the actual number of passengers travelling may have been significantly higher.

Although 2,879 flights were delayed and 604 were canceled by Saturday midday, many passengers experienced disappointment.

According to Flight Aware, there have been more than 12,000 flight cancellations in the US during the busy Juneteenth travel weekend.