Home » He Died And Came Back To Life, What She Says Jesus Told Him Will… 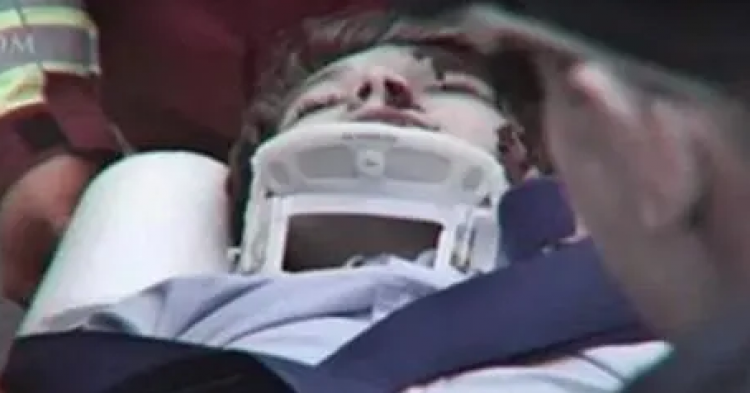 He Died And Came Back To Life, What She Says Jesus Told Him Will…

Whether or not you believe in God, this is a miraculous story.

This is the account of a boy who had been pronounced clinically dead three times. However, it was obviously not his time to go, so after he finally came to life, he astounded his mother with what he saw—in Heaven.

It all started one morning in 1997. Eight-year-old Landon Whitley was sitting in the backseat of his parent’s Pontiac Sunfire, on a trip back home from church. It was while crossing an intersection that Landon’s dad, Andy, started yelling. In a flash, an ambulance, which was returning to its station, T-boned the family’s car.

Emergency response professionals rushed to the scene and immediately knew that Landon had to be airlifted to a well-equipped North Carolina hospital if he was going to survive the devastating injuries he sustained during the accident.

“I looked but never saw what he was yelling at. I didn’t spot the ambulance approaching us, but all I can recall is that he was yelling. That was the last thing that I heard from him,” Julie said of her husband’s final moments.

The tragic accident killed Landon’s father, but Landon was lucky enough to survive.

Landon was eventually resuscitated after reaching the hospital, but his heart stopped twice, meaning he died two more times that day. Landon was brought back to life each time, but doctors told Julie that they had little hope that her son would survive after suffering such massive head trauma.

Julie, who had been planning her husband’s funeral, recalled feeling defeated and abandoned by God, but she did not give up hope or kept praying.

“He’s hooked up to all kinds of machines to keep him alive,” said Julie. “And there are no signs. There’s nothing good or bad. They see nothing happening. I kept praying that he would open his eyes.”

‘AWM’ has more details of this tragic yet inspiring story:

During his two-week coma, doctors had to bring Landon back to life several times. However, he awoke from the coma without any brain damage and was able to return to normal activities in a short period of time. He also awoke with a story about his time in the company of Jesus Christ that he wanted to share with as many people as would listen to him because he knew the message from the messiah was one that could not be ignored.

When Landon finally awoke from his two-week coma, Julie had a serious conversation with him about how his father had died.

“Do you know where dad is at?” she asked him before she got into the gruesome details of his father’s demise.

“Yes, I know where he’s at. I saw him in heaven,” Landon told his mother. “I just want people to realize that Jesus is real, there is a heaven, there are angels. And to follow his word and the Bible and life does get better at the end.”

When All That’s News reported on Landon’s near-death experience with Jesus and how he wanted everyone to know that heaven was real, readers responded with comments.

“I have no doubt about his experience! I have been with dying family members and had similar experiences,” one All That’s News reader commented on the site’s Facebook page.

“I did not make it to heaven, but I walked with four angels towards a hand reaching down in a beam of pure light. It was so peaceful. It really is true the peace of the tribe surpasses all understanding,” one person wrote.

“I know heaven is!! That’s where my husband is, and I will see him again! I thank Jesus for his love and mercy,” another added.