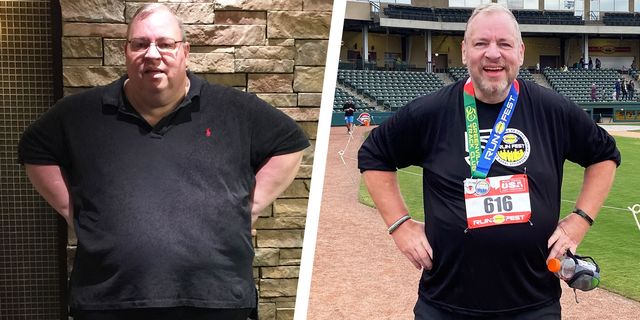 How This Guy Became a Half-Marathoner and Lost 200 Pounds

I weighed over 440 pounds when I was 55. Going outside was difficult for me since I didn’t want others to see how I looked, and I spent practically all of my time indoors, either at home or at the workplace. Despite wanting to support my children’s extracurricular activities, I was always concerned that I would make them seem bad by being the “fat dad.” Regular exercise was very hard for me due to my weight.

Being fat in today’s world is unpleasant and lonely. We are frequently discriminated against at work and assessed by others (fat people are sluggish, ignorant, etc.). We’re forced to sit in uncomfortable aircraft seats and wear clothing that never quite fits or seems right.

We are always under pressure to buy more or consume more. Why pay more for a little drink at McDonald’s when a large one is the same price?

Making significant change in that sort of setting—basically in modern society—is painfully challenging. Everything seems to be working against you. Simple tasks that most people take for granted become increasingly difficult (or impossible) in this vicious cycle, and far too frequently it just becomes simpler to retreat into greater sedentary and food-fueled solitude.

My family is prone to obesity. I’ve struggled with my weight for years, trying various diets that never quite seemed to be successful.

I would temporarily shed some weight before they returned with a vengeance.

And I came up with a bunch of defenses. There are many reasons to eat badly and not exercise, including job, family responsibilities, health problems, stress, and other priorities. Food may also be used as a reward and a distraction. I always accepted the notion that the “proper” moment to begin changing was just over the next hill and justified my conduct by attributing it to lousy genetics.

I became aware that I was running out of time to make a significant change in my life by the time I turned 55 in November 2018. I made my decision following much deliberation, a very beneficial psychiatric assessment, and consultation with a nutritionist.

That was responsible for the initial 60 to 70 pounds, which was really just a starting point. It was then up to me to use a combination of diet and exercise to continue. My diet drastically altered after the procedure; now, I can only consume amounts the size of eggs. So I focus on protein and eat less frequently but in smaller quantities, avoiding items like soda and bread that are unnutritious yet rapidly fill me up.

My pre-bariatric consultations taught me about the psychological factors that contribute to obesity: I had an addicted nature, and eating was my main focus. Although bariatric surgery doesn’t completely eradicate it, it does provide me the opportunity to redirect that energy into exercising (which I had always hated).

I was incredibly inspired by an ultramarathon documentary a few months after my operation. It forced me to concentrate on pushing myself to set and attain objectives I never believed I was physically capable of.

Running development
When I initially began out, I could hardly run a mile and always came back with blisters. I eventually discovered how to select the proper footwear, including shoes and socks, how to drink and eat beforehand, and how to choose the best routes. I joined Strava so I could monitor my development. In order to let family and friends know how the voyage was going, I also created an Instagram account.

(Yes, having informed more than 100 people you’re going to do something makes it easier to wake up at 4 AM on a Saturday for a race.)

The majority of the weight loss—more than 200 pounds—took place over the course of 18 months. I feel like a whole new person. It was fortunate for me that my weight did not result in any serious health problems. I acknowledge that, despite having a smaller frame, I will always be an obese person, and that I must make an effort every day of my life to keep the weight off. There will always be good days and terrible days, so it’s critical to avoid being distracted and reverting to negative behaviours.

I just finished my first full marathon, and I’ve run 28 half marathons in 18 different states. By the end of next year, I hope to have done 55/30. In the next five years, I want to do 100 half-marathons throughout all 50 states. I recently finished the Life Time-sponsored HOKA Chicago Half Marathon in slightly under three hours. It’s okay if I’m the sluggish man in the rear. I truly don’t care if I never come in first place in a race. Only I am in competition with.

For me, this has been a real second chance and a challenging journey on both a physical and emotional level. I advise anyone who might be trapped where I was to start by learning to appreciate themselves for who they are. Nothing will stand in your way if you have faith that you can transform your life. Don’t worry about other people, and don’t let them demotivate you with their actions. Celebrate your successes and take lessons from your failures. Most importantly, have fun.

Published in Fitness and Diet