Home » Hugging and pleading with her boyfriend after allegedly stabbing him in the stomach, 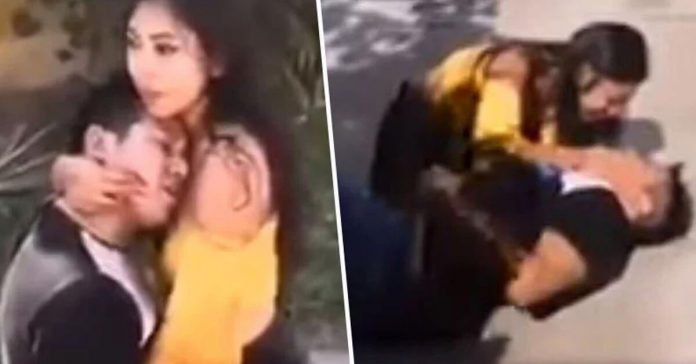 Hugging and pleading with her boyfriend after allegedly stabbing him in the stomach,

It’s not every day that bystanders witness a woman begging her husband not to die after allegedly stabbing him.

This aftermath was caught on camera after an altercation erupted between a couple in Mexico.

A group of pedestrians filmed as Sonia Amairani Núñez pleaded with her husband in an attempt to keep him from dying.

Allegedly, the 20-year-old had stabbed her husband with a sharp instrument. This incident occurred inside a motel in Mexico on the morning of March 10th. The video shows Núñez hugging Erick Omar Díaz, her husband, as he collapses to the ground.

The couple had been staying in the Las Cascadas motel in the city of Iguala.

A group of bystanders continued to form as the woman tries to comfort her injured husband.

The woman is obviously regretful for her actions and can be heard saying “forgive me, my love, please don’t die”.

Bystanders heard the woman claim that her actions were in self-defense. Although there was a police officer in the crowd of spectators, he didn’t help at all.

He simply pulled out his camera to film the incident and then walked away.

The video lasts for 12 minutes and shows the paramedics as they finally arrive at the scene.

The police officer who was at the scene before claimed that there wasn’t enough gas in his car to take the couple to the hospital.

The video shows that Díaz had been stabbed in the stomach. The severity of the wound can be seen in the footage.

According to Núñez’s social media account, the couple had been enjoying a nice meal together at a restaurant. Díaz was taken to a nearby hospital by the medics in order to receive surgery for his injuries.

Reports claim that the surgery went well and that Díaz is in a stable condition.

It is still not clear whether he will face charges for the claims of violence made by Núñez.