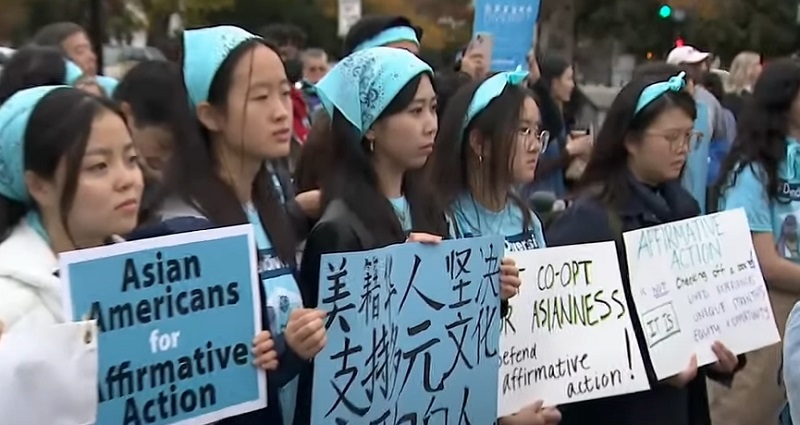 Hundreds rally in support of affirmative action outside US Supreme Court

Hundreds of students and advocates gathered in front of the U.S. Supreme Court in Washington on Monday to express their support for affirmative action.

The suits, filed by conservative group Students for Fair Admissions (SFFA), could result in the end of affirmative action across the country should the Supreme Court decide in the group’s favor.

Speakers at the gathering pointed out how students of color have had to overcome challenges to be accepted into higher education, as schools have historically excluded specific communities.

Chelsea Wang, co-educational political chair for the Harvard Asian American Association and leader of the Harvard Affirmative Action Coalition, said “the notion that affirmative action discriminates against Asian applicants is a malicious myth, and its abolition would only hurt disadvantaged Asians.”

“The evidence is clear that Asian Americans were not discriminated against, and that race was used in a beneficial way to help our communities to ensure that our communities were diverse,” Yang was quoted as saying.

Yang believes the case for affirmative action still has a chance due to legal precedent: “We have 40 years of legal history on our side. Each time affirmative action has been challenged, it has been upheld. We intend to fight not only for race-conscious decisions we have now, but to envision a world and a path forward where we demand equity in our education.”

Meanwhile, UNC for Affirmative Action organizer Christina Huang said she’s at UNC because of affirmative action, noting that ensuring all students have equal access to education is in the hands of the students, educators and alumni.

“We are the next generation of leaders,” Huang said. “We will have our voices heard. Regardless of what happens today, we will not go back. We will continue to fight for our rights and create a more equitable future for all students.”

Signed by over 100 students and activists, the statement calls on community members at all higher education institutions to encourage school administrations across the country to support affirmative action.

“Allies must take an active stance against all levels of inequalities in our society through active participation and education,” the statement reads.