Home » If Mom Makes The Shot Her Kid Gets Half Off Her Tuition. Mom Misses But Watch The Ball Closely! 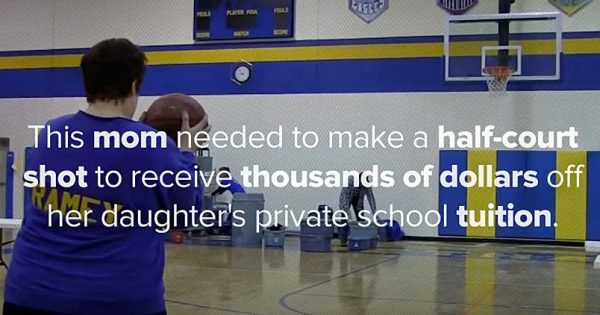 If Mom Makes The Shot Her Kid Gets Half Off Her Tuition. Mom Misses But Watch The Ball Closely!

Half court shots are extremely difficult to make, even for professionals and people who have spent a fair amount of time practicing them. That’s why they are often used as hurdles to clear in order to win a big prize.

The average person would be very lucky to make such a shot, which is often made even more difficult by the fact that a large crowd of onlookers is watching very closely. The odds are so stacked against the shot taker that it almost always guarantees they’ll miss it, yet it’s inevitable that a few lucky ones somehow manage to sink the basket.

Angela Ramey was one of the lucky ones. Her and her nine year old daughter Grace won a school fundraiser after they pulled in the most money for Kids Against Hunger, a charity which helps serve local food shelters.

Their reward was the opportunity to take a half court shot that if they made would win them a free half a years worth of tuition to Grace’s school, Bethany Academy.

Both mother and daughter tried, and failed, to make the shot before Angela was given a third and final attempt at it. Footage captured the moment she lined up with the basket and let the ball fly, à la granny-style. Sadly, it appeared to have sailed through the air and came up short as the ball landed on the ground.

At that point just about everyone in the gym, even Angela, thought it was over…but it wasn’t. The ball continued on after it hit the floor and bounced straight up and over the rim into the basket! Nothing but net!

The crowd went wild and Angela did a double take before Grace and her started happily screaming in excitement. What a fantastic shot and everyone’s reaction was just as entertaining. Perhaps in this case karma played a role.

According to the local news, the school collected more than 40,000 meals in the food drive, with Grace and her mother leading the way. All their hard work, dedication, and good deeds came back around to reward them in kind.