Home » If You Ever Notice Your Door Handle With A Rubber Band On It Do Not Touch It! THIS Is It’s Sick Meaning! 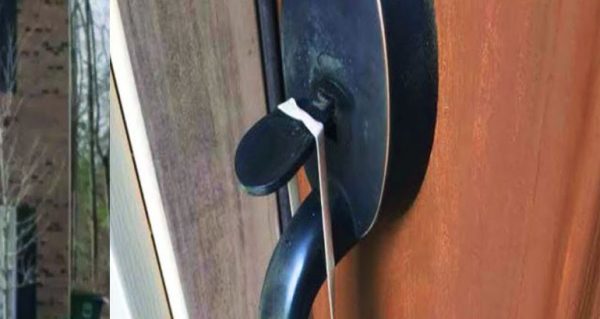 If You Ever Notice Your Door Handle With A Rubber Band On It Do Not Touch It! THIS Is It’s Sick Meaning!

A person’s house is supposed to be their sanctuary, it’s the one place they should feel the most comfortable and safe in.  When that feeling of security is diminished by a threatening presence or occurrence, it can easily be lost forever. That’s part of the reason why we add to our sense of safety and security by installing home surveillance systems, alarms, special lighting, and locks on all the doors and windows.  We want to protect not only our stuff, but also our peace of mind.

Even with the latest and greatest gadgets, there’s always a chance that they could fail.  Plus, it seems that no matter what we do, criminals are always coming up with new ways to trick us and get past our defenses.  Such was the case for a Texas woman, Kim Fleming Cernigliaro, who had been home alone one day when someone started banging loudly at her front door.

Since she wasn’t expecting anyone and was all by herself, she didn’t bother answering the door.  Plus, the person seemed to be pounding on it, which made her feel a little alarmed by the intensity.  However, she did peek a glance through a stained glass window near the door and saw that it was a man who she had never seen before.

When the banging finally stopped Kim waited a good half hour before she opened the door.  What she found on the other side confused her, it was a rubber band fastened around her door handle.  Not knowing what this could be, she called the police to see if they knew anything about it or if similar occurrences had happened in the area.  When the cops heard her story, they immediately sent an officer over to her house.

Upon arrival, the cop told her that people all over town had reported similar cases of someone banging on their door only for them to find rubber bands on the handles afterwards.  The officer explained that when a homeowner answers and unlatches the door to open it, the rubber band props the latch open. This means that when the person looks to see who’s there, the criminal can easily push their way through and get inside.  Then, since the latch is being held open by the rubber band, it makes it impossible for the homeowner to close the door and lock it back up.

Naturally, this news frightened Kim but it also made her more vigilant than ever.  She wanted to warn others of the possible danger and so she posted about it on Facebook to share what she’d learned.  In the end, while the incident did bother her, she didn’t let it get in the way of her peace of mind. Above all, she never answers the door when she’s alone, never has, never will.  After all, if someone really needs to reach you, they would call and announce or make themselves known to you.