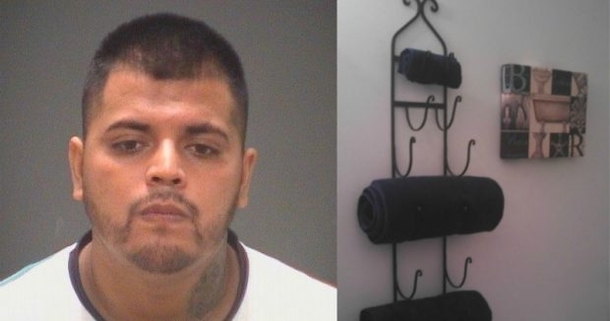 A 7-Year-Old boy in Cleveland, became scared of the bathroom when he spent one afternoon with his stepfather. Fearful to tell the truth, he was not able to keep this secret for too long as what was in the dark finally came to light. Now this father will be going to jail but unfortunately, he won’t be there long enough.

Juan Ordaz-Munoz was looking after his 7-year-old stepson when he said one innocent word that landed him in trouble. Once his dad heard the word and how it was said he used it against the kid in a very sick, horrific way.

According to Cleveland.com, the boy struggled with pronouncing the word “television” correctly, or at least in a way that didn’t sound right to Juan. After demanding that he repeat it and say it right, the little boy tried and still struggled with the word.

That’s when the 25-year-old stepfather flew into a fit of rage and took him to the bathroom where he beat the boy senseless with the towel rack he ripped off of the wall.

The boy’s mother had apparently left her son in her husband’s care again after he had already beat him once before, but perhaps the free childcare was worth risking him being abused again. This time, it was worse, when he was struck so hard with the rack that he was left with bruises and open wounds on his chest, legs, and buttocks. He wasn’t able to hide it for too long before his mom saw it and called the police.

Juan was arrested on July 27, five days after the beating took place, and he was just arraigned on Tuesday. He’s currently still sitting in jail on $50,000 bond. If his wife comes to bail him out, she should be taken into custody also for aiding and abetting her boy’s abuser.

Juan should have never been given access to this child after the first beating. If the mother knew about it and let him stick around, she’s just as sick as he is. Anything less than a lengthy jail sentence with daily towel rack beatings would be too light of a punishment for this monster.